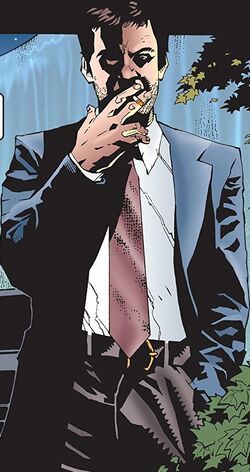 Neil Langram was a Canadian government agent, and his partner in the agency was the man called Logan. He was also a mutant, and had resolved to come out as one to the agency when he was killed by an unseen assassin, a killing which was linked by Logan and American agent Carol Danvers to a string of murders centered around a book entitled The Shadow Society, which sought to expose mutants to the public. The book's author and two of Logan and Langram's superiors at the agency were also killed before the murderer was finally captured.[1]

Langram was a trained secret agent, though even he was helpless against a superhuman such as Sabretooth.

Like this? Let us know!
Retrieved from "https://marvel.fandom.com/wiki/Neil_Langram_(Earth-616)?oldid=5257775"
Community content is available under CC-BY-SA unless otherwise noted.