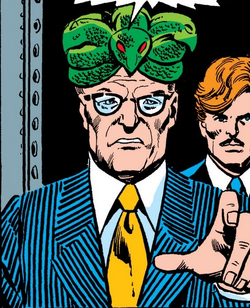 Nelson Rockefeller was the President of the United States of America on Earth-712 when the Avengers were transported there by Hugh Jones. Like Jones, Rockefeller was under the control of the Serpent Crown. He ordered the Army as well as the Squadron Supreme to capture the Avengers, but they not only managed to escape, but also stole the crown from him.[1] The Avengers then captured Rockefeller and impersonated him to make the Squadron aware of the fact that he was under the Serpent Crown's control.[2] After the Squadron publicly denounced him,[3] he was ousted from office.

Nelson Rockefeller was killed along with the other natives of Earth when this reality was destroyed.[4]

Like this? Let us know!
Retrieved from "https://marvel.fandom.com/wiki/Nelson_Rockefeller_(Earth-712)?oldid=6127114"
Community content is available under CC-BY-SA unless otherwise noted.