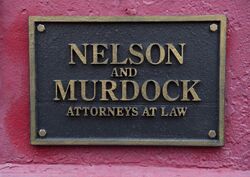 And we are gonna make a difference. I know it doesn't feel like it sometimes. A lot of the time. But we are, with the power of the law. You dragged me into this rinky-dink firm, Murdock. And I'll never be able to thank you enough.

Nelson and Murdock Attorney's at Law

The Nelson and Murdock law firm was established after Matt Murdock and Foggy Nelson graduated, thanks to funds from Foggy's father.

Their first client was Karen Page, who had accidentally discovered the illicit movement of vast amounts of money, and had then become a murder suspect after waking up next to a bloodied body with a knife in her hand.

Desperately needing clients, Murdock quickly took on the case despite Nelson's protests, but before Page had even been charged she became a target of attempted murder in the police jail. The lawyers moved swiftly to have her released and soon found themselves playing host when it became apparent that it was too unsafe to let her return home.

With nowhere else to go, Page put her business skills to use, and seizing on the opportunity Nelson and Murdock soon hired her on as a secretary.[1]

Like this? Let us know!
Retrieved from "https://marvel.fandom.com/wiki/Nelson_and_Murdock_(Earth-199999)?oldid=6224762"
Community content is available under CC-BY-SA unless otherwise noted.