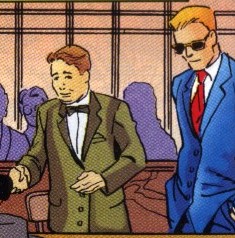 Nelson, Murdock and Sharpe seemingly had a similar history as its Earth-616 counterpart.

Eye for an Eye

Later, they were hired to defend Dr. Stephen Timmons, who had been accused of an attempt on former NYPD detective Pete DeNyse's life. They won the case, but Murdock and Nelson would learn that Timmons was actually guilty, allowing a criminal to escape and ruining DeNyse's life.[2]

The law office was creating a portfolio on Wilson Fisk, hoping to prosecute him for his crimes as Kingpin, only for their files to be stolen by Catwoman.[4]

Retrieved from "https://marvel.fandom.com/wiki/Nelson_and_Murdock_(Earth-7642)?oldid=5238872"
Community content is available under CC-BY-SA unless otherwise noted.