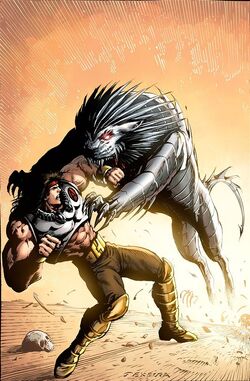 The Nemean Lion was the spawn of the Titan Typhon and of Echidna, the snake-goddess. Typhon was imprisoned under Mount Aetna after attacking the Olympian gods and Echidna fled to Arcadia where she gave birth to a host of numerous incredible creatures, each one more foul than the last. The Nemean Lion was a great lion upon whose impenetrable hide swords snapped and arrows bounced uselessly it settled in the region of Nemea where it got it's name.[1]

The Nemean Lion was the first of the Twelve Labors of Hercules. This monster of a lion had a hide was so tough that no arrow could pierce it. Hercules stunned the beast with his olive-wood club and then strangled it with his bare hands hands and with its own claws skinned the animal. The lion's hide became known as the Nemean Lion Skin and serves Hercules as impenetrable armor.[2][3]

The Nemean Lion was brought back by Eurystheus and Matsu'o Tsurayaba, and opposed Hercules and Wolverine on behalf of several of the heroes' foes.[4]

Like this? Let us know!
Retrieved from "https://marvel.fandom.com/wiki/Nemean_Lion_(Earth-616)?oldid=5488716"
Community content is available under CC-BY-SA unless otherwise noted.