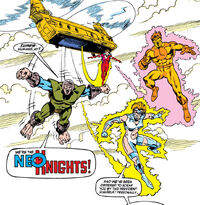 Base of Operations
Undisclosed location on Earth, presumably a building under ownership of Blackrock Industries
Affiliations

Origin
A group of super-powered beings gathered by industrialist G.B. Blackrock in order to combat the menace of evil Transformers on Earth.

Since their arrival on the planet Earth, the civil war between the two factions of the Transformers race (The heroic Autobots, and the evil Decepticons), G.B. Blackrock was often the target of the Decepticons early attempts of conquest of the planet Earth. During these early years, the Decepticons had crippled his best employee: Josie Bellar, who would build a circuit mesh exo-suit which granted her many super-human abilities which she would use to get revenge on all robots under the guise of Circuit Breaker.
During this time Blackrock would form an aliance with the Autobots, providing them with reasonable fuel resources in exchange for assistance should his corporation have any trouble with the Decepticons in the future. This agreement eventually came to an end due to the Autobots distancing themselves from their human friends due to infighting within the faction, and the repair of their ship the Ark, which allowed them to travel into space once more. Blackrock was effectivly left without any sort of protection from the Autobots except for the goverment run Intelligence and Information Institute (I.I.I.) which funded the RAAT (Rapid Action Anti-Robot Team) group charged with destroying all robots (who also once employed former Blackrock employee Circuit Breaker.)
After a major (and very public) snafu, RAAT and III were shut down, and so Blackrock took it upon himself to form a group of super-humans to combat the Decepticons wherever they may cause trouble on Earth. He originally recruited Katrin Vestotzky, a human with the ability to create dreams in the minds of sentient beings and Lee Gruber who could make his fists, feet and proportionate strength grow. Dubbing them Rapture and Thunderpunch, these two became the founding members of a group which would eventually be known as the Neo-Knights.

The original members first mission was to seek out Hector Dailonzo, who had the ability to channel the latient energies of the planet. He also soon became the target of both Circuit Breaker (Who sought to use him in her war against the robots who crippled her) and the rogue Decepticon, Starscream, who hoped to use a binary-bonding process to make Hector into the most powerful Powermaster engine in existance.

After a battle involving all three sides, Hector eventually accepted Blackrock's offer, and after some hesitation, he would take up the mantle of Dyanmo. After defeating Starscream, Circuit Breaker would also join the group, completing the groups membership.

When Shockwave and Starscream gathered together a small group of Decepticons and tried to kill Scorponok, the resulting civil war quickly got out of control and threatened to level New York in the process. In desperation, the president of the United States called Blackrock and asked for the assistance of his Neo-Knights, as he now called the group. Blackrock agreed.

Together, the Neo-Knights managed to injure Scorponok, but Circuit Breaker began to go berserk and attacked Optimus Prime and Nightbeat, who was knocked unconscious. Blackrock found himself unable to stop her, and the other Neo-Knights were unwilling to turn on one of their own. But when Blackrock recognized Shockwave amongst the Transformers, he called Circuit Breaker's attention to him. Seeing the opportunity to get revenge on the robot responsible for her crippling injuries, she immediately hit him with every last bit of energy she had stored in her suit. Shockwave was damaged and forced to crash-land, but was otherwise alright. Circuit Breaker fell into Thunderpunch's arms.

The Neo-Knights regrouped at the helicopter they came in on. However, the body of Nightbeat was in contact with the helicopter, so when Primus teleported the Transformers to Cybertron, the Neo-Knights were accidentally transported there as well. Despite the pleas from both Blackrock and Optimus, Primus seemed unconcerned that he had made such a mistake, and made no effort to correct it. Circuit Breaker, meanwhile, had gone into a psychosis caused by the nightmare of being on a planet populated entirely by the robots she both hated and feared.

Unicron attacked soon after, and the Neo-Knights were caught in the struggle. Thunderpunch attacked Unicron, but not surprisingly, was all but ignored. Dynamo had incredible difficultly tapping into the energies of Cybertron. Rapture found Unicron's mind to be too vast and powerful for her to control. And Circuit Breaker found herself unable to do anything.

Eventually, the Neo-Knights were able to distract Unicron long enough for Optimus to plunge into Unicron with the Matrix, thus destroying both of them. With Optimus dead, and Circuit Breaker practically in a coma, the Neo-Knights found themselves without any representation among the Autobots, and were treated for the most part as luggage. They were soon joined by Hi-Q, who had left Prime before his death, but was now convinced he was Optimus. Hi-Q managed to convince Blackrock to help him try to save Cybertron, which was apparently self-destructing.

With the Autobots all gone from the planet in pursuit of the Decepticons, the Neo-Knights aided Hi-Q in his search for the Last Autobot, supposedly a repository for a portion of Primus's essense. Dynamo did what he could to help by using his abilities to home in on that energy. They succeeded, and when they located the Last Autobot, he responded by reforming Hi-Q into a new body; that of Optimus Prime. He then healed Cybertron, thus stopping its self-destruction, and tranformed into a spacecraft which transported both Optimus and the Neo-Knights to the planet Klo.

On Klo, the Autobots were being decimated by the Decepticons. They arrived in time to help Grimlock and a small group of survivors launch a counterattack against Bludgeon's forces. The Neo-Knights, noteably, fought alongside Optimus in this encounter. Their present status is unknown, but it is assumed they were at least transported back to Earth.

Issue #68, where the Neo-Knights first appeared, was the only issue in the entire series drawn by Dwayne Turner, whose dark-shaded drawing style was noticeably different from other artists in the comic.

There was talk in the letter page of the comic of a separate comic for the Neo-Knights who would regularly appear in the mainstream Marvel Universe, but no such comic was ever made.

Circuit Breaker predates the introduction of the Neo-Knights. Unlike the other three members, and Blackrock, she does not distinguish between Autobots and Decepticons but instead treats all robots as her enemies. The other three members first appeared in the same issue as the team was formed.

Retrieved from "https://marvel.fandom.com/wiki/Neo-Knights_(Earth-120185)?oldid=5549020"
Community content is available under CC-BY-SA unless otherwise noted.