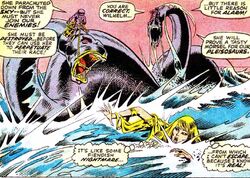 The Neu Deutschlanders is a boat of Nazi soldiers of World War II and their descendants by women in the Savage Land. They lived on the shore of Lake Lost Sinister. For generations, the chief Heinrich Draco and the head of the New British Rob Christopher continued hostilities, using dinosaurs as vehicles of war, until Ka-Zar put an end to the war. Draco and Christopher apparently perished and their people sought peace.[1]

Retrieved from "https://marvel.fandom.com/wiki/Neu_Deutschlanders_(Earth-616)?oldid=5549025"
Community content is available under CC-BY-SA unless otherwise noted.