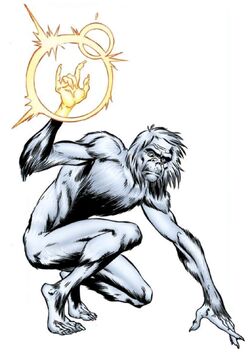 The Neuri are an ancient race of creatures who can use magic. Hundreds of years ago, they left Earth-616 for other dimensions, only returning occasionally. Meggan and Rachel found one in a caravan as they hunted for the former’s parents. It had been forced to work for a family that it saved decades before, but greed had torn the family apart until only two brothers remained. They had used it to conjour gold and illusions, such as those of Frankenstein’s monster and Dracula that they used to scare off tresspassers. It could access the Alshra, a different plane that allows life energy to be seen.[1]

Magic, ability to see and allow others to see the Alshra.

Can be bound by magic[1]

Like this? Let us know!
Retrieved from "https://marvel.fandom.com/wiki/Neuri?oldid=6393853"
Community content is available under CC-BY-SA unless otherwise noted.