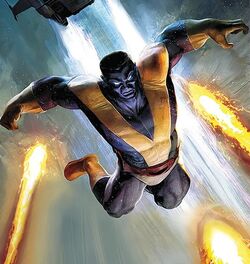 Neutron was a member of the Shi'ar Imperial Guard. He was a traitor who served Lord Samedar, Deathbird, and the Brood in their conspiracy to overthrow Shi'ar Princess-Majestrix Lilandra.[1] While Neutron was pardoned alongside the rest of the Imperial Guard traitors, and returned to service under the crown, his family was less forgiving- cutting off all contact and making it clear he would never be allowed to return home. With nowhere to go back to, Neutron pledged himself to his work. [2]

Following the defeat the Shi'ar Empire by the Inhuman-led Kree following the War of Kings, Neutron was among the Imperial Guard tasked with subjugating worlds rioting against Shi'ar control. When Izumbard declared its independence from the Empire, Neutron was part of the assault force- his quantum body nullifying the rebels attempts to shoot him down. Despite his defenses, Neutron was too slow to save his fellow Guardsman, Voltar from the explosion that killed him. [4] Later he was part of an Imperial Guard force sent to explore the Fault. Coming in contact with escapees from the Cancerverse, including that reality's X-Men, Neutron was killed saving fellow Guardsman Fang. He was later memorialized alongside other fallen Guard members.[5]

Neutron's body houses a quantum singularity ("black hole") whose energy he can manipulate for various effects, including rendering his body virtually invulnerable, increasing his strength to lift 100 tons, altering his mass to become heavier or to fly, absorb electromagnetic and kinetic energy and release energies from his body as destructive force bolts.

Flight patch, an anti-gravity device permitting him to fly

Like this? Let us know!
Retrieved from "https://marvel.fandom.com/wiki/Neutron_(Imperial_Guard)_(Earth-616)?oldid=5345027"
Community content is available under CC-BY-SA unless otherwise noted.