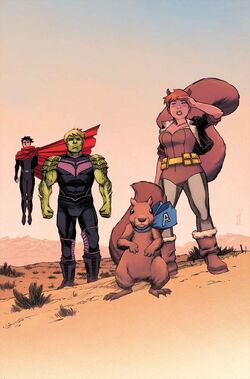 After the Avengers fell under S.H.I.E.L.D. authority and Steve Rogers began his obsessive hunt for the Illuminati, numerous Avengers left the team, refusing to hunt down fellow heroes.

Several of these former Avengers created a new team led by Sunspot, as an external party to the Illuminati/S.H.I.E.L.D. conflict and to focus exclusively on a countermeasure against the incursions that threatened the existence of Earth and the universe.[5]

Using A.I.M.'s resources, Sunspot managed to put into operation a machine capable of transporting individuals across the Multiverse, in hopes of finding the source of the decay of the Multiverse, and a group of them, the "Multiversal Avengers," embarked in said mission.[6] Meanwhile, he also began recollecting the mechanisms put in the Earth by Ex Nihilo, self-sustenance in the form of the Children of the Sun, self-defense in the form of Pod, evolution in the form of Validator, and the power of replication, seized by Shang-Chi.[2]

The Multiversal Avengers finally arrived to the base of the Black Priests, whom they believed to be enemies, as they would destroy alternate Earths. Both sides fought each other until Doctor Strange revealed himself as the leader of the Priests and stopped the conflict. Back to his Sanctum, Stephen explained them the true intention of the Black Priests, that to save the Multiverse instead of destroy it, even if their methods included the destruction of Earths.

The Avengers traveled across numerous universes, navigating the map left by the Mapmakers. After one last jump across universes that cost Nightmask's life, the Avengers found themselves face to face with a fissure in time and space. From it, two Beyonders emerged and demanded the heroes to fall back. Upon denying their request, the Avengers faced the Beyonders. In an attempt to reprogram one of the Beyonders, Abyss and the Ex Nihili sacrificed themselves, and after being stabbed by the second Beyonder, Star Brand used his last breath to unleash the energy within him and destroy it. The only surviving Avengers, Odinson and Hyperion found themselves against an incoming wave of countless of Beyonders, and faced their deaths with delight.[8]

As Val Richards had informed her father that the Illuminati couldn't win in their actions, he and his peers decided to set a trap to S.H.I.E.L.D. by letting them track the group in their safe-house of Cádiz, Spain.[4]

As the Archangel Helicarriers stationed over the safe-house and War Machine Drones, Hawkeye and Captain Marvel were deployed against the Illuminati, Sunspot brought his own ship over the Helicarriers and ordered S.H.I.E.L.D. to stand down.[4] As a response, Rogers deployed the lobotomized Hulk from an alternate dimension. Steve Rogers arrived to the battle field, where he confronted the Illuminati, and deployed the Mighty Avengers. The Mighty Avengers and the Avengers engaged the Illuminati and Sunspot's Avengers in combat until the Invisible Woman stopped the conflict.[9] Once the Illuminati and Steve Rogers came into terms, they started working together with Sunspot's Avengers.[10]

In the following months, the universe was destroyed as a consequence of the incursions and was brought back, with the inhabitants having no memory of their temporary demise.[11] Bobby completed his takeover of A.I.M. by renaming the company to Avengers Idea Mechanics, turning it into a group dedicated to international rescue operations, backed up by Sunspot's Avengers, now known as the "New Avengers."[12]

Following several adventures, the new A.I.M. was forced to respond to an emergency call from Rick Jones, a hacktivist who had been captured by S.H.I.E.L.D.. Due to the action of retrieving Jones from S.H.I.E.L.D. custody was considered an act of war, Sunspot allowed the members of his organization to vote whether to accept or refuse to partake in this mission. Da Costa decided to exile those who opposed the idea for their own good. Thus, Sunspot exiled Hulkling, Wiccan and Squirrel Girl, and bequeathed the name of the New Avengers to them.[13]

Even though the young heroes attempted to make a name for themselves, and enlisted Hawkeye in the process,[3] they soon heeded a call for help from Sunspot.[14] After freeing Songbird from S.H.I.E.L.D. custody on da Costa's behalf,[15] the New Avengers also assisted A.I.M. in fending off the New Revengers from Avenger Base Two.[16]

With Hawkeye having left the team after being put in trial for the murder of Bruce Banner,[17] and Squirrel Girl deciding to rejoin A.I.M. to keep an eye on Sunspot, Hulkling and Wiccan disbanded the team.[18]

Like this? Let us know!
Retrieved from "https://marvel.fandom.com/wiki/New_Avengers_(A.I.M.)_(Earth-616)?oldid=5765340"
Community content is available under CC-BY-SA unless otherwise noted.