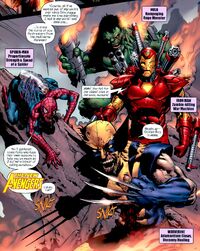 Allies
Most uninfected, any zombies who have beaten the hunger

Enemies
Any zombies who haven't beaten the hunger
Origin

Place of Defunction
The Watcher's moon base

The New Avengers were formed by the Earth-2149 Spider-Man which composed any heroes that weren't infected by the zombie virus or zombies that beat the hunger. The team battled against the zombie "Avengers", which were the only undead threat to the known universe. The zombies of the New Avengers and the Avengers finally died after the release of Sandman, who is made of Tony Stark's nanites which ate away dead cells and swarmed over the zombies, killing them for good.[1]

Retrieved from "https://marvel.fandom.com/wiki/New_Avengers_(Earth-91126)?oldid=4497542"
Community content is available under CC-BY-SA unless otherwise noted.