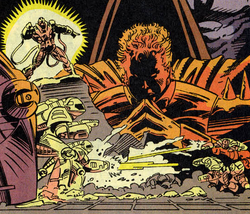 The New Canaanites were a despotic regime that replaced the empire of the mutant overlord Apocalypse in the future timeline where/when Cable was raised.

Stryfe participated in acts of aggression against the High Lords of New Canaan in the Nor-Am Pact region, but on December 25, 3806, the Canaanites defeated the remnants of the Mao-Sino Province Pact, thereby consolidating control of global forces.[1]

Like this? Let us know!
Retrieved from "https://marvel.fandom.com/wiki/New_Canaanites_(Earth-4935)?oldid=6187056"
Community content is available under CC-BY-SA unless otherwise noted.