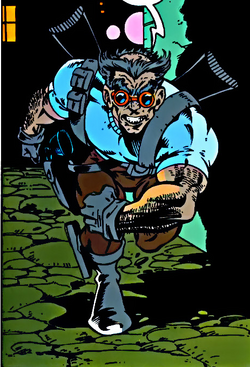 New Delhi is the capital and seat of government of India. It is also a municipality and district in Delhi and serves as the seat of Government of Delhi.

Trago was a Jazz musician who was caught stealing from his employer by Ant-Man and the Wasp. Trago returned to India, where he was trained by Ghazandi, a mystic and musician. Ghazandi taught him how to hypnotize animals as well as humans with his music, but warned him of the dangers. Trago returned to the US and used his powers to hypnotize the people of New York over the radio. He was opposed by Ant-Man and the Wasp again and was defeated when his own music started affecting him. [1]

In New Delhi, Power Man and Valkyrie are investigating a series of "Assassinations" of local people, and they stumble upon the machinations of Arthur Nagan, who also shrinks them down to size.[2]

In a conflict between the mercenary assassin Deadpool and the mutant villain Tolliver (Tyler Dayspring), Deadpool slaughtered everybody in a New Delhi townhouse that had belonged to Tolliver, everybody except Abahla. Deadpool held a sword to Abahla's throat and threatened him while asking for Tolliver's files. Abahla readily handed the files over Deadpool, allowing him to locate the last known address of Vanessa Carlyle (Copycat). [3]

In New Delhi, a man named Nyko runs from mercenaries. He is the brother of Pico, Tolliver's right-hand man. He shoots the mercenaries and then runs into a man named, Courier. Courier says that Nyko is a good source of information on Tolliver's will. Nyko says he knows nothing about it. He then gives Courier a message to give to Deadpool. He says it is from the Executive Elite and they want Deadpool killed.[4]

In New Delhi, Garabed Bashur later helped a target of one of Sabretooth's murder sprees find someone who could protect him; in this case, that someone was Maverick.[5]

The Mighty Avengers took down Zzzax in New Delhi. [8]

May Reilly and her new husband Jay Jameson visited New Delhi on their honeymoon.[9]

A young Indian girl named; Sapna was being attacked by the Indian Military in Calcutta for having M-Pox when she was rescued by Magik, who took the girl and her parents to the Jean Grey School For Higher Learning, in X-Haven, to receive medical treatment.[10]

Like this? Let us know!
Retrieved from "https://marvel.fandom.com/wiki/New_Delhi?oldid=6511827"
Community content is available under CC-BY-SA unless otherwise noted.