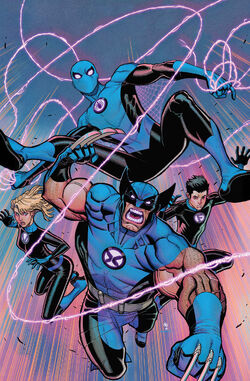 A female Skrull alien named De'Lila who was an empath, a shape-shifter, and a telepath managed to capture the true Fantastic Four. Pretending to be Susan Richards she convinced Wolverine, Spider-Man, Hulk, and Ghost Rider to form a New Fantastic Four to avenge their "deaths". She sent them to fight the Mole Man so that she could steal a powerful Skrull device that crash-landed on Monster Isle.[1]

The team briefly regrouped with Sleepwalker instead of Wolverine to fight the reformed Sinister Six.[2]

The original members reunited again as the first Secret Defenders at Dr. Strange's request to bring the Human Torch in for arson.[3]

When Franklin and Valeria needed help while the FF were away dealing with the latest Kree-Skrull threat, Valeria activated an emergency signal that summoned Spider-Man and Wolverine to aid them, but a message from their father confirmed that the children should consider themselves members of the team as well.[4]

Retrieved from "https://marvel.fandom.com/wiki/New_Fantastic_Four_(Earth-616)?oldid=5719542"
Community content is available under CC-BY-SA unless otherwise noted.