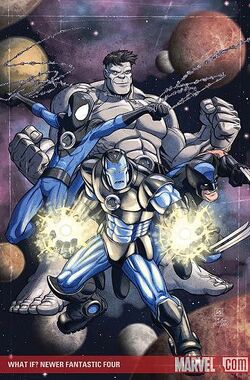 When Thanos attacked the universe with the Infinity Gauntlet, the New Fantastic Four were the best chance to oppose him, as Thanos's attack had decimated virtually all other superhero teams while the FF had only lost Ghost Rider, with Iron Man volunteering his services to compensate. In the subsequent confrontation with Thanos, Wolverine apparently defected after Thanos dismissively used the Gauntlet to separate Bruce Banner and the Hulk because he could. Iron Man attempted to oppose the villain using Celestial armor empowered by a link to the Negative Zone, but even this proved no match for Thanos's power. In the end, however, Thanos was defeated when Wolverine tricked him into dropping his guard so that Wolverine could cut off Thanos's arm and the Gauntlet, subsequently giving it to Spider-Man so that he could undo Thanos's actions. With the universe restored, Bruce Banner retired to a life of contemplation with the Watchers, who were also entrusted with the Gauntlet, while the New Fantastic Four continued.

Retrieved from "https://marvel.fandom.com/wiki/New_Fantastic_Four_(Earth-90266)?oldid=5549072"
Community content is available under CC-BY-SA unless otherwise noted.