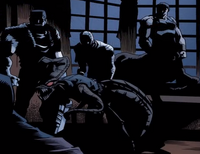 Base of Operations
Monster Metropolis
Affiliations

Origin
Dracula hired the four to hunt down Deadpool and bring him Shiklah.

I have made an error. One the New Frightful Four will fix! The perfect monstrous warriors to remind the world that Dracula is not to be trifled with!

After growing impatient while waiting for the delivery of his bride-to-be, Dracula hired four mercenaries -- Frankenstein's Monster, The Living Mummy, Xzax, and Marcus -- to form the New Frightful Four and tasked them with hunting down Deadpool and escorting Shiklah to the Monster Metropolis beneath Manhattan.[1]

When Deadpool and Shiklah arrived in New York City, Frankenstein's Monster informed the Vampires, who chased the pair into Saint Patrick's Cathedral. The New Frightful Four then prepared to enter the church, when suddenly Deadpool burst through the stain-glass window above, as the door the monsters had planned to use exploded due to a C-4 booby trap.[2]

A running battle then ensued and during the fight N'Kantu changed Deadpool's gun into a snake, which he used to strangle Marcus. Marcus then threw Deadpool at Frankenstein's Monster who used a motorcycle to bat him through a nearby storefront, but no matter what they threw at him, Deadpool kept getting back up.[3]

Xzax realized that the fight was a diversion allowing Shiklah to escape and so The Living Mummy decided to end the conflict with a spell of instant death that blasted Deadpool into a hot dog stand; however, this only aggravated Wade who promptly set N'Kantu's wrappings ablaze.[3]

Just then the clock struck midnight and Marcus asked Deadpool for a timeout to balance his blood sugar. Not wanting to kill a woozy opponent, Deadpool gave Marcus the time he needed, and as they returned to the fight, Deadpool questioned Marcus about long term effects of his diabetes. The centaur revealed he does worry about losing his hooves to the disease, before Deadpool then chopped off his legs, knocked him into some nearby wet cement, and finally flattened him with a steamroller.[3]

Marcus' death sent Xzax into a rage, but Deadpool grabbed him by the legs and flung him in front of an oncoming FDNY fire truck, splattering him across the grill. Wade then used the truck's fire hose to douse and unravel N'Kantu. While bragging about his victory over the New Frightful Four, Frankenstein's Monster pounced on Deadpool, repeatedly smashing his face into a manhole cover near the Empire State Building, until suddenly a swarm of vampires, monsters, dragons, and demons burst forth from underground, with half declaring their allegiance to Dracula and the other half backing Shiklah.[3]

Blade arrived to assist Deadpool against the monstrous horde, while they awaited the intervention of the Thunderbolts. The fight between Deadpool and Frankenstein's Monster took to the skies over the Bronx as they each mounted dragons. Eventually Deadpool had had enough, and he used the bucket of hot dogs from a Bronx Zoo vendor over the head, to stun Frankenstein's Monster, knocking him from his dragon and into a habitat full of tigers.[4]

Retrieved from "https://marvel.fandom.com/wiki/New_Frightful_Four_(Earth-616)?oldid=5549075"
Community content is available under CC-BY-SA unless otherwise noted.