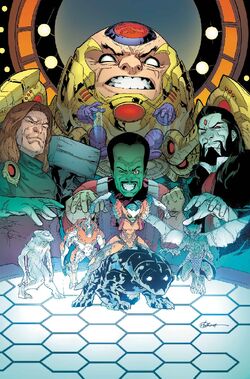 Base of Operations
Undisclosed base
Affiliations

The New Intelligencia first surfaced when they investigated the potential applications of Kid Kaiju's powers to their own interests. To this end, they hired the services of Animax and Mole Man, who caused situations in Salt Lake City that required the intervention of Kid Kaiju and his monsters so the Intelligencia could gather information.[1] Even though he was only meant to test Kid Kaiju's abilities, the Mole Man betrayed his benefactors and kidnapped the boy from Corpus Christi, hoping his powers could be used to resurrect the deceased Deviant Mutates. Because of this, the New Intelligencia hired Lady Hellbender to bring Kid Kaiju to their base.[2]

When Kei refused to concede to the New Intelligencia's demands, the villains sent a group of giant monsters to attack his home in Mu. Luckily for Kid Kaiju, his guardian, Elsa Bloodstone, came to his aid after allying herself with Mole Man. Kei and his allies then teleported away to Mu via Mordred's Causeway to protect his home.[3] In order to keep the New Intelligencia from interfering, Bloodstone commanded the Mole Man's Moloids to swarm their base. By the time the Leader subdued the creatures using his mental powers, Kei and his monsters had already won the fight, and teleported back to the New Intelligencia's base. Following their subsequent defeat, the New Intelligencia were arrested by Dum-Dum Dugan and placed in S.H.I.E.L.D. custody;[4] however, they soon escaped Ryker's Island Maximum Security Penitentiary during a massive prison break and were later tracked down by the Champions.[5]

Retrieved from "https://marvel.fandom.com/wiki/New_Intelligencia_(Earth-616)?oldid=5549082"
Community content is available under CC-BY-SA unless otherwise noted.