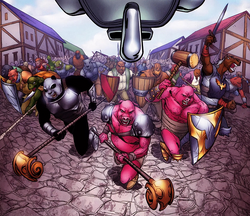 The New Men are an artificial race of mutagenically altered, Human-size animals created by the High Evolutionary to possess human-equivalent minds and consciousness. When Wyndham evolved his Dalmatian Dempsey into humanoid form, the being escaped and was killed by Wyndham's neighbors.[3]

Realizing he needed isolation to work on his creations in private, Wyndham relocated to Wundagore Mountain in the eastern European country of Transia. The New Men were created there, and educated and trained in the ways of speech by way of electronic tutoring programs.[4]

Some time later, the High Evolutionary was visited by the spirit of a 6th century sorcerer named Magnus, who warned of the coming of the demon Chthon and offered to assist in the training of select New Men as the Knights of Wundagore.[4] These brave few were able to repel the evil entity, and remained as the high guard of the Evolutionary's personal society.[5]

When the New Man known as the Man-Beast was created using a new isotope that granted him psionic powers, he quickly grew rebellious and ousted his creator from his own home. With the help of Thor, the Evolutionary was able to reclaim his castle, but decided to go into space to seek a new destiny for his creations.[6] While some, including the Knights of Wundagore, accompanied him, others decided to stay behind on Earth and establish a small hamlet on their mountain home.[7]

Those New Men who went into space would later colonize their own planet known as Wundagore II, a planet orbiting Sirius, the Dog Star.[8][9][10] However, after living there peacefully for some time, the New Men of Wundagore II began to revert to savagery and rebelled against the High Evolutionary. Needing help, the Evolutionary had the Hulk captured and sent to him but it was not enough to prevent the New Men from mortally wounding their creator. Dying, the Evolutionary subjected himself to his genetic accelerator and evolved himself into a being of pure intellect who devolved the New Men back into their original forms before leaving.[11] These New Men remained in their unevolved forms until cosmic radiation from a Rigellian space probe restored them to their humanoid forms.[12]

Later, the Evolutionary returned to Earth,[15] re-established control of his citadel and created a new generation of New Men, including new Knights, to assist him in his future experiments.[16]

When the Evolutionary learned that the god-like Celestials were coming to Earth to judge whether humanity should continue to exist or perish, with the help of the Evolutionaries he began to systematically slaughter his creations, fearing that their unnatural presence may cause the Celestials to deem the planet unworthy.[17]

After the Counter-Earth was brought back under unknown circumstances, some of the High Evolutionary's New Men started to live there.[18] However, the New Men who failed at meeting his standards were exterminated on a routine basis. Those who managed to evade extermination were given refuge in Lowtown by the Low Evolutionary.[19]

The New Men are all evolved animals of various species. Each New Man retains the traits and appearance of their species but have been uplifted to have human intelligence and bipedal form.

Skilled in both science and are all excellent fighters

Led by the High Evolutionary

Like this? Let us know!
Retrieved from "https://marvel.fandom.com/wiki/New_Men?oldid=6433355"
Community content is available under CC-BY-SA unless otherwise noted.