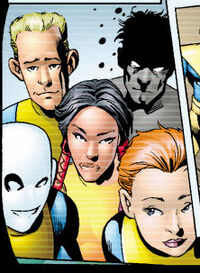 Base of Operations
Xavier's School for Gifted Youngsters (Earth-1081)
Affiliations

Earth-1081 had its own version of the New Mutants, a team of mutants who were trained to be the next generation of X-Men in this reality. Their original roster included Cannonball, Morph, Danielle Moonstar, Wolfsbane, Sunspot[1] and Warlock[2].

Not much of their history is known, Morph has commented that he, Cannonball, Mirage and Warlock used to sneak out of the X-Mansion at night to go drinking. The would often win bar bets by having Warlock drinking pure gasoline[3]. Eventually, Morph would go on to join the X-Men; the fate of the rest of the team and if the team is still active in some capacity or another remains unrevealed.

Retrieved from "https://marvel.fandom.com/wiki/New_Mutants_(Earth-1081)?oldid=5263960"
Community content is available under CC-BY-SA unless otherwise noted.