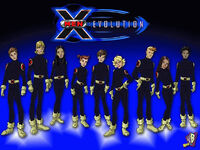 Boom Boom soon left the Institute and joined the Brotherhood, although she remained friends with several members of her old team, particularly Amara (Magma), and is presumed that she returned to the X-men after Apocalypse was defeated. Wolfsbane and Jubilee were later taken away from the school by their parents, after the existence of mutants was revealed to the world by Magneto but the two later returned at the last episode.

The New Mutants aided the X-Men in defeating Apocalypse's Horsemen.

The New Mutants first appeared during the second season of X-Men: Evolution,

Retrieved from "https://marvel.fandom.com/wiki/New_Mutants_(Earth-11052)?oldid=5549090"
Community content is available under CC-BY-SA unless otherwise noted.