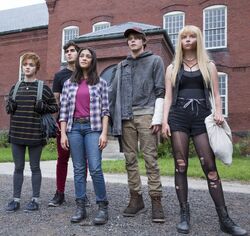 Dani Moonstar, Rahne Sinclair, Sam Guthrie, Illyana Rasputin and Roberto Da Costa were all young mutants who killed people with their new powers. Because of this, they wre put in the Milbury Hospital where Dr. Cecilia Reyes evaluated them as potential recruits for the Essex Corporation. After the truth came out, the kids decided to kill Reyes in order to get past the force field that prevented their escape. However before this could happen the Demon Bear manifestation by Dani's powers killed Reyes and proceeded to hunt them. After Dani got a hold of her powers, she as able to drive the Demon Bear away. As the sun rose, the New Mutants collected their belongings and Sam noticed that the barrier was no longer around them. The group decided to head into the nearby town which Reyes had previously told was twenty miles out, not knowing if she was telling the truth.[1]

Like this? Let us know!
Retrieved from "https://marvel.fandom.com/wiki/New_Mutants_(Earth-TRN414)?oldid=6108956"
Community content is available under CC-BY-SA unless otherwise noted.