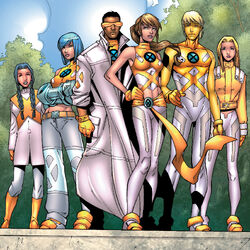 With an increasing number in the student body, Cyclops and Emma Frost reorganized the Xavier Institute's educational and training program.[1] The New Mutants Squad was advised by Dani Moonstar.[2][3][4]

Even before their official formation, New Mutants Squad and the Hellions Squad were at odds with each other.[2] The two squads became intensely competitive during Field Day events.[5] This rivalry came to a head when Wither was arrested by the FBI. The Hellions went to take on the F.B.I. and free Wither, and the New Mutants went to stop them from fighting the government. The X-Men intervened before any damage was done, but Wither and Icarus switched teams because of the event.[6]

Together the New Mutants discovered the ghost of Jeffrey Garrett was still inhabiting the X-Mansion.[7]

Wither continued to clash with Elixir (primarily over Laurie's affections). During the semester, Wither discovered Elixir had had a brief affair with a professor, Wolfsbane. He informed the entire school, successfully ending Josh's relationship with Laurie and terminating Wolfsbane's employment.[8]

Like this? Let us know!
Retrieved from "https://marvel.fandom.com/wiki/New_Mutants_Squad_(Earth-616)?oldid=5826487"
Community content is available under CC-BY-SA unless otherwise noted.