This is impossible! This can't be happening to me! 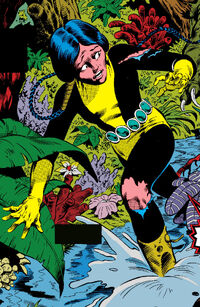 Danielle Moonstar is trapped alone in the Danger Room at Xavier's School for Gifted Youngsters. Unbeknownst to her, the safety settings have been disabled by Charles Xavier. Moonstar climbs up a cliff intending to escape the Brood and to find the exit of the training facility, but finds the Brood waiting at the top. Startled, she falls and is knocked unconscious.

Meanwhile, the four remaining New Mutants; Xi'an Coy Manh, Samuel Guthrie, Rahne Sinclair, and Roberto Da Costa along with dance instructor Stevie Hunter exit the cinema at the Salem Center Mall after watching E.T. The Extra-Terrestrial. While Hunter goes off to call the mansion to ensure all is in order, the students stop for some ice cream. Some local students, including Frank and Diane, approach the group and strike up a friendly conversation. Elsewhere in the mall, after her phone call to the mansion goes unanswered, Hunter is grabbed by Michael Rossi who claims that the New Mutants are in danger.

From inside Project Wideawake's base of operations, analysists observe the New Mutant's activities in the mall. While Agent Gyrich explains to Sebastian Shaw the danger that mutants pose to the national security of the United States, unaware the Shaw is himself a mutant. Shaw asks Gyrich if he intends to use the Sentinels against the New Mutants, but Gyrich states that would cause too much of a public disturbance, instead he intends to send agents to take the students into custody. However, Shaw has his own agenda in mind for the young mutants.

Back at the mail, government agents sent by Gyrich, including John Ogilvie, arrive at the mall to take custody of the four New Mutants. They initially intend to go peacefully, but soon Hunter and Rossi arrive on the scene and help free the students from custody. Then, four Sentinels arrive at the mall to capture the mutants, but they fight back against the robots and eventually defeat them. After the Sentinels have been disabled, the young mutants leave the mall with Hunter and Rossi while Ogilvie and other federal agents are taken into custody by local police.

When the group returns to the school, they discover Moonstar unconscious on the Danger Room floor. As they approach, she recovers and warns them of the experience she had with the Brood.