Sorry about this kid.

—Cannonball, as he knocks out Psyche

Danielle Moonstar is sleeping in her room at Xavier's School for Gifted Youngsters and has a nightmare where she is attacked by a shadowy monster. She stabs at the monster and attempts to flee to warn her fellow students, but sees that they've all been slain by their primal fear or anguished memory. Then the monster grabs Moonstar, and she desperately grabs at the monster removing it's mask revealing it to be the bear that killed her parents. 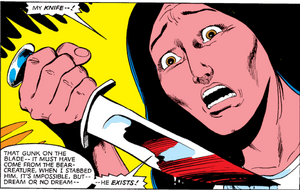 She wakes from her nightmare screaming, causing her fellow students to check on her. Later, Charles Xavier examines her and determining that nothing is physically wrong, and recommends that she go back to sleep. Moonstar is unable to sleep and fears that she is in danger, so she retrieves her knife, surprised to see that there is blood on it, apparently from when she stabbed the bear in her dream. Moonstar gets up from bed, intending to report her finding to Xavier. As she reaches his study, she hears that he is on the phone with Dr. Moira MacTaggert discussing Moonstar. Xavier is concerned that she has mental problems beyond his ability to handle. Dr. MacTaggert tells Xavier to scan Moonstar's mind to determine what the issue might be.

At MacTaggert's Muir Island lab, she discusses with Sean Cassidy her conversation with Xavier about Moonstar. They also talk about get married and having children of their own, but MacTaggert is worried about having more children due to what happened with her own son, Proteus.[1]

Outside the facility on Muir Island, Cassidy meets Illyana Rasputin, she is worried about her friend Katherine Pryde and the rest of the X-Men, who were kidnapped by the Brood.[2]

Back at Xavier's estate, Moonstar talks with Xi'an Coy Manh about fears she has about someone targeting her and that Xavier is somehow involved. Meanwhile, Samuel Guthrie is training in the Danger Room under the guidance of Xavier. At the end of the session, Guthrie is summoned by Manh to meet the rest of the students including Roberto Da Costa, Rahne Sinclair, and Moonstar in the boat house. There, Moonstar explains to the other four students her concerns. When they open the door to leave the boat house, they find a fantastic landscape, so they decide to exit through a trap door in the floor into a service tunnel where they are attacked by the Brood and other strange monsters. Eventually, Moonstar is grabbed by the Brood and screams in despair; she wakes to discover that she is wrapped up by the Brood in Xavier's study. She then realizes that he bear, the monsters in the tunnel, and even the Brood itself are creations of her own mind, expressions of her mutant power. The rest of the New Mutant team breaks into the study and battle the Brood. During the battle, Moonstar tells Guthrie to knock her out to get rid of the Brood, since it is her mind creating their adversary. Guthrie heeds her advice and once Moonstar is knocked unconscious, the Brood disappears.

Later in the evening, the students all gather to watch the television program Magnum P.I.