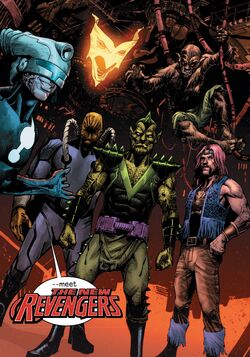 The New Revengers were a group of supervillains assembled by the Maker as a strike force to directly confront A.I.M.'s New Avengers in his attempt to take them over.[1]

When A.I.M. was distracted confronting S.H.I.E.L.D., the Maker took the chance to send the New Revengers after them. The Maker and Skar subdued Pod and attacked Toni Ho,[2] O.M.N.I.T.R.O.N.I.C.U.S. sealed off Bobbi da Costa in his office and fired his defense systems at him, Angela del Toro confronted her aunt and fellow White Tiger, Ava Ayala, and the remaining members attacked several sections of Avenger Base Two and its staff.[3]

Toni Ho managed to defend herself from Skar and even kill him after donning her Rescue Armor, Bobbi escaped from O.M.N.I.T.R.O.N.I.C.U.S.' grasp with the help of Warlock, and Ayala broke Angela free from the Tiger God's and the Hand's evil influence, getting her to join A.I.M.'s side.[4] When the remaining active New Revenges and the Maker attacked the White Tigers, they were assisted by the New Avengers and other members of A.I.M. who were returning from a rescue mission. Finding himself outnumbered, the Maker decided to flee and leave the New Revengers to keep fighting until their eventual and collective defeat at the hands of the heroes.[5]

Retrieved from "https://marvel.fandom.com/wiki/New_Revengers_(Earth-616)?oldid=5765732"
Community content is available under CC-BY-SA unless otherwise noted.