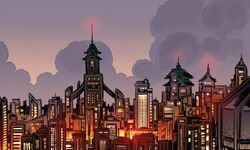 Before Captain America, who had been transformed by a Cosmic Cube into a Hydra sleeper agent, took over the United States of America, he reached out to Magneto. Expecting heavy resistance from the nation he planned to take over, Rogers decided to neutralize possible mutant interference by granting them a sovereign land in the western United States, with the only condition being that no mutant would be able to step foot in America.

Hydra's official position was that mutant occupation in the region was illegal, and a consequence of the fall of the previous regime. Even though Captain America conceded that a conflict between the two nations would be inevitable once Hydra settled in, he ensured the situation wouldn't degrade into armed conflict in years, giving mutants the opportunity to thrive during that long reprieve. Finding himself making a deal with the devil, Magneto agreed for the sake of mutantkind.

Xorn was appointed as the leader of this mutant nation, known as New Tian, while Magneto remained presumed dead and hiding in Madripoor.[1] Xorn was just a puppet ruler as the true ruler of New Tian was Emma Frost, who was appointed by Rogers to secretly control Xorn with her telepathy from behind the scenes. This fact was unbeknownst to everybody else, even Shen's advisors.[2]

Quake later led her group to New Tian to look for missing Inhumans where they found a revived Dark Beast in a secret laboratory beneath an outhouse experimenting on some Inhumans. As Quake's group tortures Dark Beast for the location of the Inhuman Leer, Dark Beast stated that he has no knowledge of where Leer is. The New Tian mutants broke up the interrogation upon their arrival where they removed Quake's group from New Tian and had Dark Beast taken into custody.[3]

Fearful of a possible attack on New Tian after Hydra invaded Wakanda, Emma approached Steve with her fragment of the Cosmic Cube in an attempt to appease Hydra. However, Steve rebuffed her once he obtained the shard, claiming he had every intention on doing so. With any pretense of peace shattered, the mutants entered the final battle with Magneto emerging and striking down Steve's flagship.[4]

After the liberation of the United States, the United States Army stepped in to reclaim New Tian and restore it to its former glory, using Sentinels to destroy the signs boasting mutant superiority. As they did, Emma and the Beast mused over their situation, with the former considering having New Tian declare war on America with what little time the country had left. Beast advised her against this, claiming that mutants will always be subjugated in some way.[5]

Like this? Let us know!
Retrieved from "https://marvel.fandom.com/wiki/New_Tian?oldid=5791956"
Community content is available under CC-BY-SA unless otherwise noted.