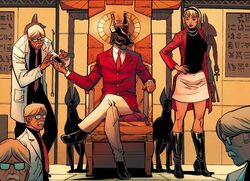 New U Technologies was an American biotech company located in San Francisco, California, which was founded and run by The Jackal. Through New U, the Jackal developed a revolutionary procedure which involved cloning tissue free of disease, and would eventually offer it as a cutting-edge medical treatment fronted by Dr. Rita Clarkson.[2]

Using the resources at his disposal, the Jackal had started to reanimate the dead in cloned bodies, with the intention of using them to manipulate their loved ones to do his bidding, beginning with George and Gwen Stacy.[3] He then secured the services of the Rhino by reanimating Oksana Sytsevich,[4] as well as those of the Lizard with the return of Billy and Martha Connors,[5] whom they broke out of the Andru Correctional Facility alongside Max Dillon.[6]

The Jackal next attempted to bring Fisk Enterprises into the fold; however, the Kingpin saw the reanimated Vanessa Fisk as an abomination, swiftly killing her and ordering his men to shoot the Jackal for the pain he'd caused.[7] This forced the Rhino to have to intervene and drew the attention of Spider-Man.[8]

When Jay Jameson fell ill,[9] the attending physician, Dr. McCray, contacted Dr. Clarkson. Peter Parker was initially skeptical and decided to fly to San Francisco to meet with New U Technologies to discuss the procedure further.[2] En route, he contacted Prowler and asked him to break into New U Headquarters,[10] where unbeknownst to them the Jackal, Lizard, and Dr. Martha Connors were preparing to restore Max Dillon's powers, producing Francine Frye, back from the dead, to further persuade him.[2]

The procedure failed; however, Francine could feel the electrical power because the DNA harvested to produce her reanimation was tainted by the kiss from Max that originally cost her her life. She kissed Max once again, the powers of Electro flowing into her, electrocuting Max in the process. Prowler revealed himself and attempted to intervene, but was too late to save Max's life. Hobie then tried to flee, but Francine, overzealous for her first fight, apparently killed him too, forcing the Jackal to "reanimate" Prowler as well.[10]

Meanwhile, an industrial accident at a Parker Industries facility in Oklahoma catastrophically injured Jerry Salteres. With two people in his life now gravely ill, Peter then decided to bring in Dr. Clarkson to save the life of his employee as an extreme test case, which the Jackal approved of, despite it not being part of their plan.[2] Peter once again contacted Prowler, unaware that he had been reanimated, and Hobie told him that he had uncovered nothing of concern;[10] however, after the procedure, Peter went to visit Jerry in the hospital, only to discover that the man now set off his Spider-Sense.

Back in California, Dr. Clarkson met with Jay's son, J. Jonah Jameson, and to prove there was no limits to what New U could do, introduced him to his reanimated wife, Dr. Marla Madison-Jameson,[2] who prompted her husband to use his position at Fact Channel News to promote New U Technologies and attempt to pressure Peter, who remained hesitant due to the earlier triggering of his Spider-Sense, into convincing May Parker-Jameson that their procedure would be best for his father; however, Jay passed away in the interim.[7]

With the knowledge he acquired from the New U files that Peter sent to Anna Maria Marconi investigate,[2] the copy of Doctor Octopus' consciousness, who had secretly worked for months at Parker Industries as the Living Brain, decided to clone his former self's body in order to inhabit it.[11] It led Otto to discover that New U Technologies had been buying the bodies of many deceased criminals, such as his former self and the Spider-Slayer, in order to bring them back to life through cloning. Otto secretly had his former self's body delivered to New U Headquarters, where it was cloned and cleansed of any disease. After erasing the copy of Peter Parker's consciousness from the cloned body's brain and taking over it, Otto was invited by the Jackal to be part of New U Technologies.[12]

After attending Jay's funeral, Peter and Anna Maria paid Jerry Salteres a visit in order to investigate New U Technologies further, and ended up discovering that he had been taken by New U for suffering from what Peter identified as cellular degeneration for not taking the New U Pills daily as prescribed. Using a microscopic Spider-Tracer he had tagged Jerry with at the hospital when his Spider-Sense had gone off, Peter Parker infiltrated New U Headquarters as Spider-Man, and eventually found Jerry's nervous system, completely stripped off his body but still alive, inside a stasis tube. Peter was eventually confronted by the Jackal,[3] along with all of villains who had been resurrected by him, Gwen and Captain Stacy. Ben offered Peter a chance to join him, in order to use the combined power of New U and Parker Industries to help the world, but Peter turned him down. When Gwen Stacy was outed as an impostor, with the original having being replaced by her superpowered counterpart from an alternate universe who had been investigating the Jackal's operations, Peter found the chance to escape with her.[13]

Eluding capture from other villains, Ben caught up with Peter, who overpowered him easily. Finally, Ben unmasked and revealed his identity to Peter. He made his offer again to Peter, this time offering up the chance to bring back Uncle Ben as an incentive.[14] After hearing Ben's story of his resurrection,[15] Peter accompanied him to his secondary base of operations, Transamerica Pyramid, seemingly giving Ben a chance.

Once there, Ben showed Peter the apparent utopia he had built, a place where Spider-Man's friends and foes coexisted peacefully. Having realized that Ben possessed power but not responsibility, Peter reprimanded him, prompting Ben to order the villains he had brought back to attack him. Reilly returned to the lab, where Doc Ock and Ben's hostage Anna Maria Marconi had discovered it was a specific type of frequency which caused the cellular decay, and an inverse frequency could stop the decay altogether.

Doc Ock amplified the frequency responsible for the decay and piped it throughout the base after discovering that the Jackal was a clone, having decided to sabotage his enterprise for having disrespected Anna Maria, whom Otto loved. When all the clones in the base began to break down and turn into Carrions, Ben decided to broadcast the decaying signal across the entire world, causing an outbreak of the Carrion Virus globally, with the intention to bring every single person back as a clone once they had died.[1]

Spider-Man managed to hack into the emergency system of his Webware and had all of these devices globally emit the inverse frequency, stopping the outbreak and curing all those who hadn't yet completely broken down. With his plan having collapsed, the Jackal took the opportunity to fake his death, having survived his decay but putting his clothes on top of a pile of a clone's ashes.

Having seen the error of her ways, Rita Clarkson revealed to Spider-Man a sub-basement where New U's patients were kept in stasis while their respective clones took over their lives. Some of these patients were going to die due to the illness that New U was supposed to cure, while others managed to survive due to New U's procedures having restored them to a healthy state.[16] Clarkson also gave S.H.I.E.L.D. access to the database of New U's clients worldwide.

Transamerica Pyramid was then taken over by S.H.I.E.L.D. to calculate any possible bio-hazard risk and dismantle the remains of the Jackal's enterprise.[17]

Like this? Let us know!
Retrieved from "https://marvel.fandom.com/wiki/New_U_Technologies_(Earth-616)?oldid=6031231"
Community content is available under CC-BY-SA unless otherwise noted.