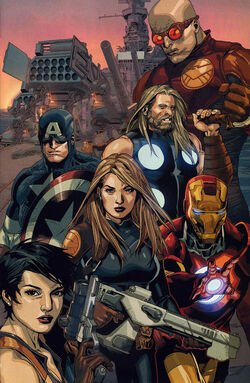 Base of Operations
Triskelion
Affiliations

The New Ultimates' first show of heroics was on a night eight months after Magneto's attack, when Iron Man was with Hawkeye, discussing the changes after Ultimatum. Tony made it very clear that he had lost practically everything because of Ultimatum. Suddenly, the Defenders, a teenage wannabe superhero team arrived, but this time as villains, possessing actual superpowers. As the rest of team came to aid Iron Man and Hawkeye in the fight, the Defenders left with what they came for: Mjolnir. This allowed Loki to teleport back to Earth to resume his chaos. Carol Danvers revealed to Tony that she had one of the Defenders, Hellstorm, working undercover.[1]

At the same time, Captain America goes to talk with Valkyrie about the Defenders. He demands that Valkyrie leave the team because he knows that she knows more about the Defenders than any of the other team members. He fears that she is a traitor, like Black Widow. She goes on to escape by throwing herself through a window. Later Hawkeye discovers that Tony and Carol have a relationship when he spots them having sexual relations. After that, the Enchantress manipulates Zarda, Carol Danvers, and Valkyrie to fight against the other members of the team. In this event Iron man´s armor is destroyed, Hawkeye is shot, and Captain America´s shield is destroyed.[2]

Hawkeye, Captain America, and Iron Man are later seen captured by Loki's hordes. It is then revealed that Danvers was never under the direct control of the Enchantress, as she had night vision contact lenses, which brought her to her senses. She freed Hawkeye, which leads to the rest of the team escaping as well when the Black Panther frees Captain America and Shanna and Ka-Zar free Iron Man. Zarda and Valkyrie remain under Loki's magical control. Later on, the other members of the New Ultimates lead an assault on Loki, which leads to Hawkeye killing Amora, freeing Zarda and Valkyrie of Loki's influence. Valkyrie attacks Loki, only to be killed by him. This then leads to Thor being able to leave the afterlife, vowing that blood shall be spilled because of his brother's actions.[3]

Retrieved from "https://marvel.fandom.com/wiki/New_Ultimates_(Earth-1610)?oldid=5752567"
Community content is available under CC-BY-SA unless otherwise noted.