DON’T CALL IT A COMEBACK!

Or Night Thrasher will knock you out! Or better yet, he’ll get one of the new recruits to do it! With Kamala’s Law in full effect – forbidding unsupervised super heroics by anyone under the age of 21 – it’s time for the New Warriors to step up. Thrasher reunites with Firestar, Rage, Speedball, Namorita and Silhouette to mentor a whole new generation of heroes…whether they like it or not. Introducing the NEW New Warriors – and the epoch of their thrilling new adventures! 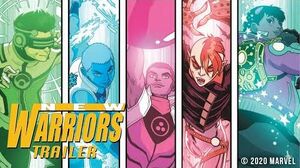 Retrieved from "https://marvel.fandom.com/wiki/New_Warriors_Vol_6_1?oldid=5711211"
Community content is available under CC-BY-SA unless otherwise noted.