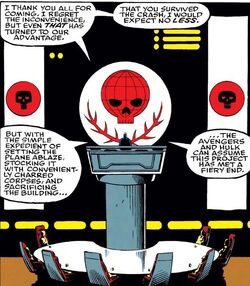 The New World Order was an organization that was founded by the Red Skull in a yet another plot to take over the entire world. The organization structure of this agency is mostly unknown, although it appears to be founded by supervillains, for the most part.[1]

Initially, the Red Skull legally purchased a parcel of land in the Amazon Jungle. This purchase upset environmental groups as well as getting the attention of the Patheon a secret organization that sought to create world peace. The Hulk went to investigate the situation on behalf of the organization. Upon his arrival, he was ambushed and taken prisoner by the Juggernaut.[2] While the Red Skull had his scientists create a creature called Piecemeal while also getting the mutant known as Mentallo to brainwash the Hulk. When the Avengers eventually arrived, the Hulk was totally under their control.[3] In the ensuing battle, the Hulk broke free from the Red Skull's mental control and helped the Avengers defeat the Juggernaut. About to exposed, the Red Skull made it appear that a jet carrying other members of the NWO to crash into his fortress, destroying every trace of their organization. However, all the members of the organization survived and met deep below in a secret meeting room. The identities of these members, with the exception of the mobster Silvermane, is mostly unknown. In addition to the loss of their fortress, the New World Order also lost Piecemeal.[1] Their agent, the Madman recovered Piecemeal and used the creature to terrorize Loch Ness in Scotland. This prompted retired Pantheon agent Perseus to summon the Hulk to investigate.[4] The Hulk clashed with the two creatures there, seemingly slaying Piecemeal, but Madman escaped.[5] The Hulk later stopped Madman from murdering a member of the British Royal Family in London with the help of Motormouth and Killpower.[6]

The operations of the New World Order are unknown following this. It appears that the Red Skull had long since abandoned the organization. Other members continued to operate under it's original mandate. Some time later, the NWO became concerned about the activities of the mutant known as Apocalypse. Particularly when he transformed the Hulk into his new Horseman known as Death. With their agent, the Absorbing Man, they enlisted the aid of the Hulk's longtime ally Rick Jones and Janice, Rick's granddaughter in the possible future of Earth-9200. Unfortunately, they were too late to stop Apocalypse from transforming the Hulk into his agent, prompting the NWO to send the Juggernaut to deal with their foe.[7] Although the Juggernaut was able to break the Hulk free of Apocalypse's control. Their only mistake was recovering the sword that Apocalypse had given the Hulk as a weapon. As the master planners of the NWO examined it, Apocalypse contacted them through the weapon, telling them that they will be incapable of stopping the cataclysm that was coming. Before they could learn more, Apocalypse made the weapon explode, killing the high ranking members of the organization.[8]

The organization has not been seen since, and is presumed to have disbanded.

Retrieved from "https://marvel.fandom.com/wiki/New_World_Order_(Earth-616)?oldid=5608265"
Community content is available under CC-BY-SA unless otherwise noted.