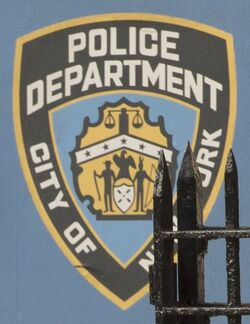 The New York City Police Department was formed in the mid-19th Century with a purpose of undertaking conventional municipal policing. As effective as they were as a police force for the citizens of New York City, they found themselves quite unprepared for the dawning of a new age of super-powered threats to public safety in the city. Over the course of a week they found themselves unable to do much more than evacuating people from the Stark Expo where a small force of robots had gone on the rampage in an attack on Tony Stark,[1] and in Harlem where two green giants fought a protracted battle of their own.[2] And then in 2012, the nightmare of threats beyond human capability took on a whole new dimension as a Chitauri army lay waste to the city. In this conflict, elements of the NYPD allowed themselves to be commanded by one of the city primary defenders at the time; Captain America.[3]

Two years after the Battle of New York, with the city well into an extensive rebuild, word of a masked vigilante beating up criminals in the Hell's Kitchen area began to spread throughout the city. NYPD officers were at a loss in finding this individual. Some among them had by this point had also fallen into the employ of Wilson Fisk, doing his bidding through various middle men. Officer Clyde Farnum was even sent to murder Karen Page, a young woman who had accidentally discovered some of Fisk's criminal operations, in the NYPD's own jail.[4]

Retrieved from "https://marvel.fandom.com/wiki/New_York_City_Police_Department_(Earth-199999)?oldid=5582089"
Community content is available under CC-BY-SA unless otherwise noted.