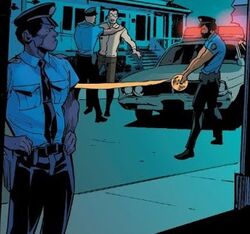 The NYPD's history mirrored that of its Earth-616 counterpart. When Ben Parker was murdered, they blocked off the Parker Residence and policeman Bernard O'Brien informed Parker's nephew, Peter, of his uncle's death. Officers cornered the murdered at Acme Warehouse, but were unable to take him in as he had been killed by Spider-Man, whom the NYPD also failed to capture. Years later, they brought in Harry Osborn to identify the body of his father, Norman, Spider-Man's last victim.[1]

Retrieved from "https://marvel.fandom.com/wiki/New_York_City_Police_Department_(Earth-71928)?oldid=5238478"
Community content is available under CC-BY-SA unless otherwise noted.