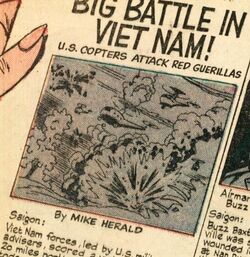 The New York Star is a newspaper in New York City, New York.[1] According to Dorothy Walker's fictionalized comic book series based on her daughter Patsy Walker's life, after high school both Patsy and her friend Hedy Wolfe briefly worked there under editor Saul Morris.[2]

Like this? Let us know!
Retrieved from "https://marvel.fandom.com/wiki/New_York_Star_(Earth-616)?oldid=5993903"
Community content is available under CC-BY-SA unless otherwise noted.