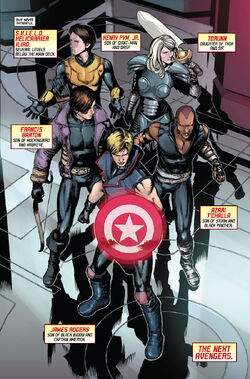 Origin
The children of the Avengers mightiest members unite to save mankind from their parents murderer, Ultron.

The Next Avengers were the sons and daughters of the first generation of Avengers. Their world was ruled by Ultron, and they survived with the help of Iron Man, Spider-Girl, and Maestro.

When the Avengers of Earth-616 visited Earth-10071 and where brought back to the past, they traveled back to the future creating the divergent Earth-10943 by convincing Ultron into surrendering to Kang' army.[1] Upon Ultron's defeat, Immortus turned on the heroes, killing Maestro, Spider-Girl, and Iron Man, but the Avengers Next then killed him.[2]

The Earth recovered from Ultron's reign, and when A.I.M. started delivering future tech to their past counterparts, the Next Avengers were brought to the past in order to stop them.[3] They succeeded, and stopped A.I.M.'s technological growth by releasing a device named "Sigkill" which erased all of their data.[4]

After helping S.H.I.E.L.D., the Next Avengers deciced to stay in the past.[5]

Retrieved from "https://marvel.fandom.com/wiki/Next_Avengers_(Earth-10943)?oldid=5549250"
Community content is available under CC-BY-SA unless otherwise noted.