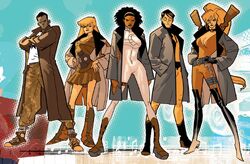 Nextwave was an elite anti-terrorism team assembled by Dirk Anger, director of H.A.T.E. (Highest Anti-Terrorism Effort). It consisted of Elsa Bloodstone, the Captain, Monica Rambeau, Tabitha Smith, and Aaron Stack.[1] All of them were unknowingly moved to Earth-63163 by the Beyond Corporation.[2] Their memories and personalities were also altered in the process.[3]

Before the Nextwave Squad's first mission, in which they were supposed to die,[4] Tabitha managed to steal a copy of the Beyond Corp's marketing plan and alerted her teammates about it. The discovery that H.A.T.E. was backed by Beyond led them to steal the experimental Shockwave Rider aircraft and go rogue.[1] The team then went on to systematically take down the threats outlined in the plan, such as the draconic alien Fin Fang Foom and the other-dimensional Mindless Ones, all the while resisting Dirk's efforts to capture them.[5] Anyway, Devil Dinosaur was behind it all and he died.[6]

The Nextwave Squad members were eventually returned to Earth-616 and it was claimed that none of the preceding events really happened.[7]

Retrieved from "https://marvel.fandom.com/wiki/Nextwave_(Earth-63163)?oldid=6105564"
Community content is available under CC-BY-SA unless otherwise noted.