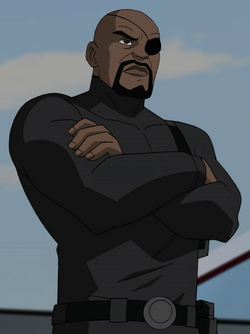 Welcome to S.H.I.E.L.D., Spider-Man. Hope you survive the experience.

Nick Fury is an Agent of S.H.I.E.L.D. a global peace keeping force. As their best agent he rose through the ranks becoming the Director worked closely with Agent Coulson. During his time he has allied himself with other heroes such as the Avengers. Overtime he decided to create his own S.H.I.E.L.D. Training Program, in which he recruited young heroes. Some of the heroes he recruited are Nova (Sam Alexander), White Tiger (Ava Ayala), Iron Fist (Danny Rand), and Power Man (Luke Cage).

Nick Fury confronted Peter Parker about his actions in taking down the Trapster, he questioned him on how Captain America would have done it. He offered him a position on S.H.I.E.L.D., but he declined. Spider-Man came back to him later and was welcomed by Fury to try a test of his abilities.[1]

Fury and other agents watched as Spider-Man fought training robots. He and Curt Connors showed Spider-Man gadgets that were based of him before they were interrupted by Agent Coulson. He monitored Spider-Man when he first rode his Spider-Cycle Fury talked to Spider-Man after he announced he was leaving S.H.I.E.L.D., Fury and Spider-Man managed to reach an agreement for him to stay.[2]

Nick Fury assigned the team to not destroy any of the test simulation robots, but, Spider-Man and Nova managed to disregard that order when they competed with each other to destroy the robots faster than each other. Fury assigned the team to clean up their mess, Spider-Man and the others brought Doctor Doom to him captured. Doom turned out to be a Doombot in disguise, Nick Fury helped Spider-Man and the others in defeating the Doombots, he then scolded them for their actions and was surprised when they all took responsibility.[3]

When Spider-Man is attacked by an Octobot, Fury appears via screen in the Cycle and tells him to use the elctro mode of the web-shooters.[4]

Flight of the Iron Spider

After the Living Laser disappeared, Fury talked to Iron Man about him. When Spider Man was invited by Iron Man to Stark Industries, he warned him to not go. Fury sent the team without Spider-Man to confront Living Laser. After Spider-Man apologized, Fury confronted him about his actions and showed him the Iron Spider Armor with improvements. Fury wondered if he could use it right, but, Spider-Man messed up and he left him to clean up after himself.[5]

Fury was contacted by Spider-Man when he needed assistance in a battle with the Hulk. Fury and his agents arrived to arrest Hulk, but, were told by Spider-Man that Hulk had helped him defeat Zzzax. Zzzax turned out to still be conscious and tried to destroy New York. Fury was present when Mary Jane Watson stopped Zzzax with the battery of her camera [6]

Fury briefed the trainees about the new black costumed Spider-Man, he was impressed by him and wanted to recruit him. After Spider-Man defeated him as Venom, Fury believed he knew the secret identity of that person but the Spider-Man pretends that he doesn't really know the secret ID of Venom.[7]

Fury splits up a fight between Wolverine and Spider-Man argue over how to have handled the fight with Mesmero.[8]

Nick Fury brief the team on the search for Venom, but Harry hides the identity of the host. They defeat Venom saving Harry, the team train at the Helicarrier, but Spider-Man stops the session and say thanks to the team. The team then decide to use a special training program they created called "squash the Spider". [9]

When Whirlwind was defeated he approached Spider-Man who still caused collateral damage and noted to him that. He ordered him to go back to the Helicarrier to train, but Spider-Man ignored it and left the scene. After Spider-Man found out of the spy cameras in his house, he complained to Fury, but he assured Spider-Man that he signed a contract that they are allowed to put the cameras in it. Spider-Man was mad and temporarily left S.H.I.E.L.D. for the weekend, which Fury let him through. Later, Fury was contacted by Spider-Man, who requested for help. Fury found his location and went after Spider-man. They found Spider-Man unconscious and brought him into the infirmary, Peter apologized to Fury and they compromised that there will be only one camera outside the house and the other footage would be deleted, Fury was amazed at the maturity of Peter. The next day, Fury showed the embarrassing footage of Peter to the trainees, which he laughed at it with the others and then deleted the footage.[10]

When Spider-Man is discussing his doubt regarding magic he uses invisible watch as an example saying he has a talking troll on it revealing a sleeping Nick Fury has been put to sleep along with the rest of New York.[11]

For Your Eye Only

When the S.H.I.E.L.D. Helicarrier is taken over by Zodiac, lead by Scorpio. Spider-Man arrives to help and together they are able to reclaim the Helicarrier. It is reveals that Scorpio is Max Fury, Nick young brother.[12]

Due to the success of their last mission they are sent by Fury on their first sanctioned SHIELD Op. They are put on S.H.I.E.L.D. security detail to protect J. Jonah Jameson. The Beetle planned to take Jameson before the released of his expose.[13]

On a snow day team are ordered to travel to I.C.E., to take part in winter training. They disregard Nick Fury's order and Nova using SHIELD database travel to island in the Caribbean. Their they battle Sandman who had been imprisoned their by S.H.I.E.L.D. when Fury and Coulson captured him years ago, revealing Fury used to have an Afro. They finally escape on the jet as a giant Sandman tries to grab them, on their way to New York Fury contacts them telling not to land. Sandman had hitched a lift and was now on the frozen river heading towards New York. They defeat the Sandman and he is then kept in a container that keeps moving, preventing him from reforming and escaping.[14]

Following a fight with the Wrecking Crew, Spider-Man and the other S.H.I.E.L.D. Trainees are ordered by Fury to work with Damage Control in order to find out the Wrecking Crew's motives. [15]

Spider-Man has no choice but to keep Hulk hidden from Aunt May and Fury.[16]

Fury and the team protect Spider-Man from and Asgardian hunting party, as he had been turned into Spider-Ham by Loki.[17]

Fury protects Norman Osborn and his son Harry who are being threatened by Doctor Octopus. They are taken to the Helicarrier but Doc Ock attacks in his new Iron Octopus armor. With the help of Iron Man they protect Osborn and take him down.[18]

Fury invited Captain America to the Helicarrier for a training session with the team, which lead to them losing his Shield.[19]

Norman Osborn is turned into the "Goblin" by Doc Ock. After a long battle with the team Fury S.H.I.E.L.D. arrive to help but the Goblin gets away[20]

Rise of the Goblin

The team try and protect Harry from his father, but the Goblin defeats all the S.H.I.E.LMD. agent and Helicarrier imitating Coulson's voice. He crashes though the window and confronts his son, offering him to join him, appearing to have regained his intelligence. Harry spoke with his father but they put an energy barrier trapping the Goblin. The Goblin goes back out the hole in the carrier. The team ran through carrier to find Doc Connors who's arm had been crushed in the attack. The Goblin steels S.H.I.E.L.D. technology including electro-gloves and Glider. Spider-Man attacked him, but he escapes through a hole blasted by Nova. The symbiote begins to over Harry again, the Helicarrier is evacuated.The Helicarrier crashed into the Hudson River, while Norman spoke with his son, who had become Venom once more. Now teamed up Spider-Man he fought them both. Spider-Man was then helped by Fury who blasted them both, but the Helicarrier was being flooded. Harry tried to escape the symbiote, but was electrocuted and separated. The Goblin takes the symbiote and escaped. Spider-Man got Harry and Fury and the other S.H.I.E.L.D. agents to escape pods. [21]

he team lead by Spider-Man battle Doctor Octopus in his warehouse base. During the fight the are rescued by Nick Fury and a group of SHIELD agents who blast Doc Ock unconscious, they retrieve the suitcase. [22]

Fury teams Spider-Man up with former S.H.I.E.L.D. agent Hawkeye. Who are brought together to take down the Beetle.[24]

Fury talked with Spider-Man after he captured five of the Sinister Six, Peter is distraught at losing the Lizard by Fury reassures him this was a win.[25]

Fury and S.H.I.E.L.D. protect Harry Osbron after his father the Goblin attacks and kidnaps Peter Parker. Only for him to return and attack them possessed by the Carnage (Symbiote)[26]

The Avengers send out a call to all it's member including S.H.I.E.L.D. trainee Sam Wilson. Sam is in the middle of training with Fury when the call comes in and abandons his session. Leading to Fury firing him over the Avengers communicator.[27]

Fury sends the team on a mission to the moon to rescue John Jameson, the son of J. Jonah Jameson.[28]

When Loki shrinks the team into children they were taken to the Helicarrier and test were performed on them. Nick Fury with no other options was forced to put the team in D.A.Y.C.A.R.E., and monitored by Nanny Bots, with Agent Coulson's face.[29]

Journey of the Iron Fist

It is revealed that Nick Fury recruited Iron Fist during his year long sojourn from K'un-Lun so he could use his time saying goodbye to the outside world helping people.[30]

Nick Fury planned to use the mutant criminal Mesmero to enter the Hulk mind, increasing his intelligence so he can now be a force for good. The procedure however went wrong and Spider-Man and Hulks minds are switched. After a battle with Mesmero and the procedure reversed S.H.I.E.L.D. arrived to take down the Hulk, but he escapes but appears to have gained a new level of control and mildly increased intelligence.[31]

Spider-Man interrupted him and they explain that Deadpool was in the program before he was recruited. Deadpool tells Spider-Man that Nick Fury considers him a son and he can prove it he has papers. Deadpool then goes into the Tri-Carrier's computer to look for Agent MacGuffin who has stolen the encrypted information about the secret identities of every superhero and S.H.I.E.L.D. agent. When Deapool leaves Nick Fury arrives and realizes, he has stolen from the database. Deadpool reveals what is thought to be his true origin but it is impossible to confirm, he was a street kid taken in by Fury and at first the program worked, then he realized he was being manipulated and controlled and decided to leave.[32]

Fury led a squad of S.H.I.E.L.D. agents in an attack against Zodiac at one of their Volcano bases. He was assisted by Agent Coulson, Power Man and Spider-Man. He order the the Tricarrier to blow a hole in the rock so they could enter the facility. He sends Power Man and Spider-Man to retrieve the Zodiac Key. The mission was successful and Scorpio is taken into custody. It is then he discovered his old friends Walter and Amanda Cage, Power Man's parents are still alive.[33]

The son of Molecule Man; Aaron Reece aka Molecule Kid is then given to Fury and S.H.I.E.L.D. by the Avengers to put in his training program for teenage superheroes.[34]

Seemingly, those of Nicholas Fury (Earth-1610)#Powers

Seemingly those of Nicholas Fury (Earth-1610)#Abilities.

Like this? Let us know!
Retrieved from "https://marvel.fandom.com/wiki/Nicholas_Fury_(Earth-12041)?oldid=5737759"
Community content is available under CC-BY-SA unless otherwise noted.