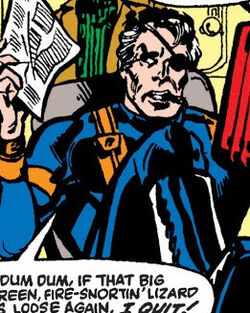 It's unknown entirely what Nick Fury's history is like, but it could be assumed it was similar to his Earth-616 counterpart's (including possibly an encounter with Godzilla) until the revival of the Transformers.

When the Transformers resumed their war while in Oregon, Dum-Dum reported to Nick that they needed to check out what was going on in that area. Fury hoped that it's not Godzilla again, or he'd quit.

Seemingly those of Nicholas Fury (Earth-616)#Powers

Like this? Let us know!
Retrieved from "https://marvel.fandom.com/wiki/Nicholas_Fury_(Earth-91274)?oldid=5861203"
Community content is available under CC-BY-SA unless otherwise noted.