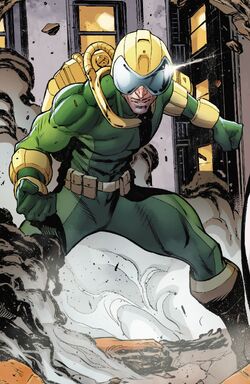 Nicholas Powell was a compulsive gambler, feeling that only the biggest risks could give some emotion to his life. He led a life of increasing danger, and he began betting not only his money but also his life in mercenary adventures. He developed a unique combat uniform to begin a new career as super-mercenary "Chance".[1]

One of his trademarks was that he did not charge money for his services. Instead, he bets his own payment with his employers. If he can execute the job, he wins the bet; if he does not, he pays a similar amount. Normal bets include $5000 for burglary, $10000 for murder and $20000 for an important theft. He was hired by crimelord The Foreigner to kill Andre, a receiver of stolen goods who specialized in jewelry and rare metals. Spider-Man discovered the murder just after Chance had left; however, Chance managed to see Spider-Man from the shadows. Chance then made a new bet with the Foreigner: Chance bet he could kill Spider-Man in 24 hours. He used old-timer jewel thief Black Fox as bait to find Spider-Man. Chance could not kill Spider-Man but he did accidentally convince the Black Fox to return the jewel he was trying to hide. Spider-Man defeated Chance and left him to the police, but Chance managed to avoid arrest.[1]

Daredevil unwittingly gets a cab driver Nigel Townes caught in the middle of a corrupt government power struggle and has to save the guy's life when the bad guys hire Chance to kill him.[2]

Chance's next important job came later when he was hired by industrialist Carlton Drake of the Life Foundation to help them build their ultimate survival asylum, Sanctum Maximus. Chance was supposed to steal weapons from the Sanctum Maximus Police Department. However, Chance was betrayed by the Foundation, who wanted the secret of his wrist blasters. Probably Chance would have given them that information in a deal, but he would never give it under coercion. He was tortured in vain. Spider-Man found Chance and both of them became allies to destroy Sanctum Maximus and defeat Life Foundation. This alliance would not end in friendship, but Chance offered Spider-Man a lift to Manhattan.[3]

Casino owner Raymond Trask has refused to join the Kingpin's organization so the mob boss hires Vulture to kill him and takes wagers on whether his assassin will succeed. Mob boss Mr. Grouper doesn't have faith in Vulture, so he hires Chance as back-up to kill Trask. Nathan Lubensky hoping to create a nest egg for May Parker, the dying Nathan bets his money on Trask's death. Peter attends the grand opening of Trask's new casino yacht. The Vulture attacks but Spider-Man steps in. Chance takes advantage and attacks Trask but Spidey webs up Chance's helmet and he flees, flying blind.[4]

Trask then hired him again under the pretense of protecting Trask from an assassin. Trask tried to get revenge by killing him but failed.[5]

Cardiac crossed paths with Chance when both of them were hunting Enos Warwick.[6] Later on, Powell became a competitor in the Great Game. Unlike other players, Chance acted as his own sponsor.[7]

He was arrested and taken to Seagate Prison. He challenged the recently incarcerated Hawkeye to a fight along with a group of inmates. However before they could kill him, however, they were stopped by Mentallo.[8]

He attended the Tinkerer's auction of the Venom symbiote.[9]

During the Spider-Island; he worked alongside Scorcher and White Rabbit and attacked Peter Parker and Carlie Cooper at a Empire State University lab. However he was knocked out by Peter.[10]

Chance was hired by Angela Golden to assassinate Tulio Guzman at the Sherman Hotel. Hawkeye was meeting with Guzman that night, with the solo Avengers interference he decided to double with $500,000 for his head. Hawkeye during the fight decided to offer his own wager himself the for his employers name. He agreed and the two battled but was interrupted by Trace who knocked him out. He tried to get up but Hawkeye jammed an arrow in his shoulder. Chance said the wager was null and void due to third party interference.[11] He was sent to Ryker's Island, were he was met by Hawkeye. He agreed to a card game if Hawkeye won he would give him the name, but if won he would be sent to a minimum security prison. Hawkeye won and he told him about Angela Golden. As Hawkeye left he told him to watch his back.[12]

He was hired by Daniel Gump a clairvoyant who foresaw an attack by Deadpool. Chance was hired with a group of other mercenary to kill the Merc with the Mouth. They face Deadpool and Spider-Man on the top of Gump Tower. Not expecting Spidey, Chance tried to change the wager, but Gump refused. The duo escaped as they opened fire, a bullet hit the Trapster's Paste-Gun and covered the roof his glue trapping Chance and the others there.[13]

At some point in time, Powell was captured by S.H.I.E.L.D. and imprisoned in Pleasant Hill, a prison for super-villains where its inhabitants had their memories and appearances tampered with using a sentient Cosmic Cube, so they could become model citizens in the small town. During a breakout, Chance managed to escape. Horrified by the perversion of his identity, Powell ceased any criminal activity, fearing being put in a place like Pleasant Hill again. He hid his equipment and worked to overcome his gambling addiction.

Disillusioned with the lack of any consequence for the authorities that put him through such violation of human rights, Powell donned his equipment once again and attacked the press conference that was being held for the recently-returned Steve Rogers, who was taking up the mantle of Captain America once again after a brief retirement. He was stopped by the man sharing the Captain America moniker with Rogers, Sam Wilson.[14]

Helmet: The helmet provides Chance with the following useful features:

Power Pack: Chance's pack includes 20 charges for his wrist blasters, and power for helmet and jet systems. It has wires joining the helmet to the power pack; if the wires are damaged, Chance would suffer a stunning electric shock.

Wrist Blasters in the form of golden bracelets with two different weapon systems. Each bracelet has a dart pistol in the back, and a plasma generator inside. The bracelets can be used with normal clothes, looking like harmless (although loud) jewelry

Like this? Let us know!
Retrieved from "https://marvel.fandom.com/wiki/Nicholas_Powell_(Earth-616)?oldid=6475011"
Community content is available under CC-BY-SA unless otherwise noted.