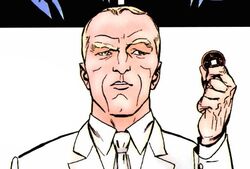 Dr. Nicodemus West was a long time admirer of Dr. Stephen Strange's surgical abilities. Dr. West performed the surgery that saved Strange's hands but left him with severe nerve damage following his automobile accident.[2] Racked with guilt over robbing the world of Strange's medical service, Nicodemus followed Strange to Kamar-Taj arriving only days after Strange had completed his mystical training and departed. Concerned that Strange may not rise to the challenge of becoming the Sorcerer Supreme, the Ancient One elected to begin training Nicodemus in the mystic arts. After learning some of the essentials of mystic healing, Nicodemus departed Kamar-Taj without completing his training. Nicodemus was able to heal a young girl injured in a small town on the Tibet-India border. However, after returning to New York City, Dr. West attempted to heal Reginald Pavlish which resulted in Pavlish's untimely death. Fearing the repercussions of using magic, West accepted a position C.E.O. of Timely Pharmaceuticals on the conditions they protect him from the consequences of Pavlish's death and stop him from using any more magic.[3]

West continued to keep tabs on Strange, and when he learned Strange had acquired Otkid's Elixir, he sent Brigand to break into the Sanctum Sanctorum and steal it.[4] The theft ultimately resulted in the death of West and destruction of nearly all of Otkid's Elixir.[5]

Sorcery: Nicodemus has uncompleted training in the mystic arts by the Ancient One. As such, he has some limited mastery of spells and magic. He has demonstrated some limited aptitude for magical healing. The full extent of his abilities are unknown.[3]

Medical training as a surgical physician[2] and limited training in the mystic arts by the Ancient One.[3]

Like this? Let us know!
Retrieved from "https://marvel.fandom.com/wiki/Nicodemus_West_(Earth-616)?oldid=5809328"
Community content is available under CC-BY-SA unless otherwise noted.