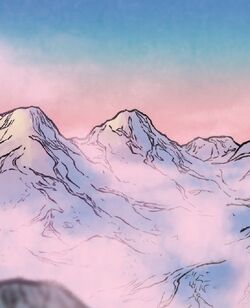 The Furnaces of Nidavellir. Land of the Dwarves. Mjolnir, my hammer, was forged here. As well as another, Stormbreaker, for Beta Ray Bill.

Nidavellir is one of the Ten Realms. It's located in the middle region of the World Tree on the same level as Midgard,[1] though it is also a part of the same dimension as Asgard, Alfheim, and Vanaheim -- each being located on different regions of the same continent.[2] Its inhabitants are the Dwarves.[3] The Dwarves live underground working in the caverns of the realm. They have large forgers utilizing the flames and heat from beneath the surface to create weapons used by the Dwarves and their allies. Dwarves are the race that have crafted the most powerful weapons in the Nine Realms including: Mjolnir,[4] Gungnir, and Stormbreaker.[5] The nomadic Rock Trolls also inhabit some areas of this land.[6]

After the All-Father Odin of Asgard thwarted a Rock Troll invasion attempt led by Ulik, his realm and Nidavellir forged an alliance. As a gift and as a symbol of the bond between these two realms, the Dwarf King Eitri gifted Odin a nugget of raw Uru. This nugget of Uru was later given back to the Dwarves by Odin when he had used it to trap a sentient storm known as the God Tempest, so they could forge it into a weapon, the magical mallet known as Mjolnir.[7]

During the War of the Serpent, Odin Borson gave Tony Stark permission to access the forges of Nidavellir,[8] where he created an arsenal of Uru weapons to combat the enemy forces razing the Earth.[9] In order to acquire his own enhancements, Tony merged the systems of the Bleeding Edge Armor with Uru, turning it into the "Iron Destroyer" until the battle ended.[10]

When Baron Zemo used the Norn Stones; Iron Man was transported to Nidavellir.[11] It was their he met Eitri the King of the Dwarves and master black smith. After explaining where he was they ran into the Rock Troll; Ulik. The battle was hard fought, two dwarven warriors were dead, leaving only Etrie and Iron Man victorious over the troll. After Ulik's defeat, they went to The Forge where they built the Thorbuster Armor made from the metal Uru and based on the Destroyer in preparation in his battle against Loki with the Avengers.[12]

On Earth-12041; Spider-Man, his team and Thor/Throg traveled to Nidavellir and met with Eitri master forger. They request his help to create weapons to defeat Loki. Eitri refused, saying that Thor never thanked him for Mjolnir. Spider-Man tells Throg to apologize, and he reluctantly does. Eitri then gives the team weapons to fight Loki. The weapons each use their shortfall as a strength: White Tiger has a mystical bow that can only work when she ignores other distractions. Nova has a Halberd that only works with a steady hand. Iron Fist is given a short sword forcing him to trust his instincts and Power Man uses an axe to harness his power. Spider-Man is given nothing but the duty to lead the team and use his banter.[13]

Nidavellir was one of the worlds taken by the Beyonder to create Battleworld with the City of New York placed within its underground cavers, dubbing it "Underworld NYC". Nidavellir also inhabits Stone Skinned Rock Trolls.[14]

Nidavellir appeared during the convergence of realms that occurs once every 5000 years.[15] A multi-ringed megastructure orbits a dying neutron star, powering the furnaces and the home of the Dwarves of Nidavellir, a race of blacksmiths among whose most notable works was the creation of Mjolnir, the magical hammer of the Asgardian prince Thor.

In preparation for his journey to assemble the six Infinity Stones, Thanos attacked Nidavellir, forcing the lead Dwarf Eitri to design a gauntlet capable of harnessing the gems’ powers. After obtaining the glove, Thanos had all the Dwarves killed, save for Eitri, whose hands Thanos fused off with metal. Following the massacre, the neutron star at Nidavellir's core burnt itself of all its energy, leaving the entire station and its forges to be frozen shut.

Following Thor's encounter with the Guardians of the Galaxy in the aftermath of Thanos' attack on The Statesman, he departed to Nidavellir with Rocket and Groot to forge a weapon capable of killing Thanos. When they arrived, they found Nidavellir in its dire state. With the help of Rocket, Thor managed to get the forges started again by jump-starting the rings surrounding the star. Eitri was then able to make a brand new axe for Thor, and Groot shared some of his wood to make the handle of this new weapon: Stormbreaker.[16]

Like this? Let us know!
Retrieved from "https://marvel.fandom.com/wiki/Nidavellir?oldid=6403393"
Community content is available under CC-BY-SA unless otherwise noted.