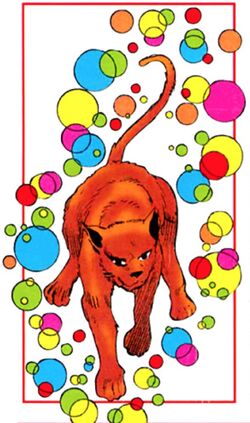 After high school, Robbie Baldwin began working under Dr. Benson at his Hammond Labs. An accident occurred while the scientists were investigating an energy source originating from another dimension. Numerous energy bubbles shot out of the dimension and started to engulf Niels and Robbie granting them both kinetic superpowers. Robbie Baldwin decided to use his newfound powers to become the superhero Speedball.[8]

The Speedball Revenge Squad was hired by the villainous Clyde in hopes of taking the feline's powers for himself. They were easily defeated by Speedball.[1]

After the tragic events of Stamford, Connecticut,[10] Robbie Baldwin transformed from the happy-go-lucky Speedball to the regretful Penance.[11] Penance explains to Squirrel Girl that Niels was now P-Cat, the Penitent Puss.[2]

While recovering from Norman Osborn's brainwashing, Trauma was able to get a hold of Niels and gave him to an amnesic Penance for use as a therapy animal.[12]

Niels eventually ended up in the custody of S.H.I.E.L.D., who kept him in captivity and began experimenting on him to study his powers. With the experimentations having ended, Niels was scheduled to be euthanized because he was seen as too dangerous.[4] However, Jim Hammond took pity on him for being different and decided to save Niels' life by adopting him.[14]

Similar to Speedball, Niels has kinetic powers due to accidental exposure to extra-dimensional energy during a lab experiment. His powers include:

Like this? Let us know!
Retrieved from "https://marvel.fandom.com/wiki/Niels_(Earth-616)?oldid=5707379"
Community content is available under CC-BY-SA unless otherwise noted.