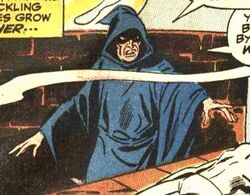 Sir Nigel Carruthers was a sorcerer leading a band of witches and Warlocks. When he stumbled onto the Silver Surfer, who had crashed outside his home after being struck by meteors, he used the Surfer's power to summon the Abomination from his imprisonment by the Stranger. The Surfer defeated the Abomination and ordered Carruthers to return him to his prison.[1]

Carruthers had some degree of sorcerous ability.

Like this? Let us know!
Retrieved from "https://marvel.fandom.com/wiki/Nigel_Carruthers_(Earth-616)?oldid=3728430"
Community content is available under CC-BY-SA unless otherwise noted.