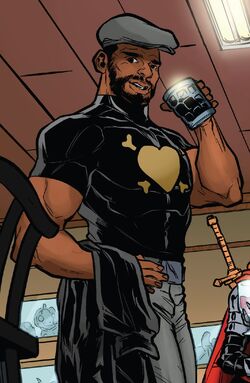 I got sick of killing people, Frank. Honestly, that's all it was. And... I got sick of being told it was okay. That it was good. That some people were just... just scum that needed shooting. That some people aren't proper human beings. That folk on benefits are scroungers, folk fleeing warzones are a swarm... I dunno. I feel like... Like just needing help is enough to take you off the human list these days. Like that's been outlawed. Punishment for everyone. No wonder they called me a hero.

Nigel Higgins was inspired by Frank Castle to become England's version of the Punisher. He served as Castle and Microchip's contact in London when the Kingpin intended to use the English Channel to gather a united European crime syndicate.[2]

After hearing of the Punisher's apparent death in New York City, Outlaw came to America to investigate. He got involved with a number of Punisher allies, copycats, and nemeses who zeroed in on the small town of Laastekist where Castle was reported to be found alive.[3]

Back in England, Nigel opposed the Architect's plan to reprise the plot to use the Channel for a European crime network; faking his death during an attack by Rapido.[4]

Some years later, Nigel decided to retire from his vigilante activities, regretting to have taken in his hands the decision whether certain people should be allowed to live or not.[5] He moved to North Yorkshire, where he adopted the alias of "Neil Hibbs" in order to live a normal life. However, Higgin's peaceful life was cut short when he was targeted by the Collector and brought to the Battlerealm against his will, in order to take part of the "Contest of Champions" against the Grandmaster.[1]

Outlaw managed to survive the numerous battles in the conflict, and witness as the Collector's right-hand, the Maestro, betrayed him and stole his source of power, the ISO-Sphere, becoming the new ruler of Battlerealm.[6] When Maestro confronted and defeated Outlaw and the older contestants together with new adquisitions, two contestants believed dead, Stick and the Sentry reappeared and cut short Maestro's victory, giving the contestants a second wind. Outlaw managed to get hold of the ISO-Sphere and wish for the contestants to return to whichever place they wanted, for Maestro to be contained, and for the ISO-Sphere itself to shatter.

Nigel not only returned to England together with the other contestants from his same universe, with whom he decided to create a team, but he also wished for all the lives he had taken to return. Higgins also decided to return to superheroics, but helping the people who needed it instead of punishing them.[5]

Skilled in armed and unarmed combat.

Like this? Let us know!
Retrieved from "https://marvel.fandom.com/wiki/Nigel_Higgins_(Earth-616)?oldid=5414068"
Community content is available under CC-BY-SA unless otherwise noted.