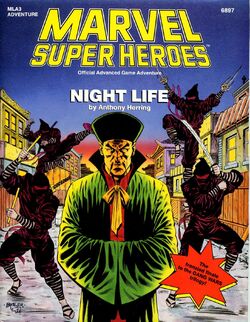 Fu Manchu has kidnapped teenage genius Cameron Seaver to build five "spirit bombs" which, when combined with Fu's magics, will open portals to the Nether Realm, the hell-like dimension where Fu had been imprisoned until recently. The Faces of Fear remain allied with him, and Maggia opposes them. The Gang War rages on: A bomb on a Maggia-frequented restaurant kills one of their leaders. Seaver worked at Roxxon Oil so, when investigation, the heroes discover an oil spill that will affect Long Island, and that has positioned general opinion against Roxxon. They do not know that Seaver's boss, Hiram Jones, is being blackmailed by Fu Manchu to provide technology and, when the heroes start meddling, mercenary supervillains are sent against them. The heroes may discover that the Rulers of the Nether Realm oppose to Fu Manchu's plan and want him stopped and returned to their tortures. Meanwhile, Maggia reacts with violence in Chinatown; but the Faces of Fear play dirty and plant a bomb in Maggia's warehouse. There's also a UFO in Central Park (which is explicitly a red herring), and the Kingpin insists in meeting with the heroes: Kingpin wants to manipulate the heroes for his own ends. The heroes go to the Si Fan secret HQ, either because the Kingpin revealed where it was, or because they convinced Hiram Jones to help them. They rescue Seaver, who reveals that Fu Manchu has five bombs, four of which are in known locations, albeit protected. Seaver gives the heroes a device that will close one single portal, should one of the bombs explode. Fu Manchu has the fifth bomb on himself. He, Fixer and Mentallo ride a giant Deathlok robot to attack Hammerhead's mansion; but the robot is confronted by Hammerhead's minion Goliath while Hammerhead himself escapes. When the robot is destroyed by Goliath and the heroes, Fu Manchu detonates the last bomb, only to discover that the monsters from the Nether Realm want him back: Fu is captured; Fixer and Mentallo try to escape; and probably the book is recovered. The heroes can either return the book to the Museum, or destroy it like the Rulers of the Nether Realm wanted. Roxxon purportedly stops Seaver's project, understanding it is too dangerous. There are a number of loose ends, including the oil spill, which has enraged a number of Atlantean barbarians.

Like this? Let us know!
Retrieved from "https://marvel.fandom.com/wiki/Night_Life?oldid=6478018"
Community content is available under CC-BY-SA unless otherwise noted.