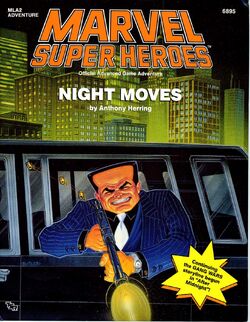 The Faces of Fear have stolen a grimoire from the Museum, trying to incriminate their rival Hammerhead of Maggia. The Faces have associated with the Si Fan organization against Maggia: The Si Fan supports the Faces of Fear in exchange for the book, which they aim to use to resurrect their leader, Fu Manchu. Meanwhile, Maggia has associated with another Chinatown gang, the Dragonlords led by the White Dragon; and the Chinatown citizens have made their own band, Tiger's Claw, to protect themselves. Following the suggestion of Metropolitan Museum curator Maximilian Pride, who wants the book back, the heroes investigate rumors of a ghost-like appearance in a Chinatown restaurant. Meanwhile, the Dragonlords have stolen the box containing Fu's corpse -albeit Si Fan leader Lee Min claims that it contains mundane merchandise; and Hammerhead sends the White Dragon to murder the heroes, using inocents as a bait. Hammerhead also sends villains and robots against the Tiger's Claw, unaware of the Si Fan's plan. The Si Fan is getting the ingredients for their resurrection spell, and the Dragonlords have captured several Avengers thanks to a specific weapon. The good citizens of Chinatown are constantly harassed by violent villains, several of them being forced to obey illegal orders. The heroes find a Faces of Fear lair and they defeat their newest high-level minion, a Deathlok Simulacrum. The Si Fan treacherously steal Fu Manchu's corpse from the Dragonlords, even though the heroes have tried to help following a hint of a mysterious English-accented ally. As the White Dragon is arrested, Chinatown gives a premature celebration party - which is interrupted by Fu Manchu's ghost. After that, the mysterious ally reveals himself as Shang-Chi, estranged son of Fu Manchu, who's looking for his sister Fah Lo Suee. Fah had been captured by the Si Fan as a sacrifice to resurrect Fu Manchu. When Shang-Chi leads his allies to the Si Fan headquarters, they are likely captured and forced to attend the resurrection ceremony. Revived, Fu Manchu orders his minions to kill the heroes, but they fail. However, Fu Manchu is back and will rebuild his worldwide criminal empire in the shortests of time.

Retrieved from "https://marvel.fandom.com/wiki/Night_Moves?oldid=5756850"
Community content is available under CC-BY-SA unless otherwise noted.