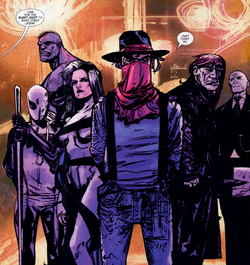 Origin
The Night Shift was originally formed by Shroud, a vigilante posing as a crime boss in Los Angeles. Most of the members believed they had joined a criminal gang, but the Shroud secretly guided the group of misfit superhumans to prey on other criminals.

They are mercenaries. Self-interested cowards at heart.

The history of the Night Shift likely began with the villain known as the Locksmith, a fanatical escape artist who imprisoned super-beings in his private jail because he felt that their abilities diminished the achievements of normal humans. The Locksmith was eventually captured when the original Spider-Woman led a mass escape from the Locksmith's prison. Soon after, the vigilante Shroud - posing as a crime boss - recruited several of the Locksmith's former prisoners to serve as a criminal front for his vigilante activities. These early Night Shift members included Gypsy Moth and the Shroud's one-time foe, Dansen Macabre. Shroud bolstered the Night Shift with the Locksmith's assistant, the future-predicting Tick Tock, and several other misfits. With his group assembled, the Shroud established several bases and safe-houses throughout Los Angeles, including the "Tower of Shadows."[1]

Although the Shroud claimed to be a crime lord, he actually sought to infiltrate the criminal underworld and destroy it from within. Thus, the Shroud manipulated the Night Shift members into battling other criminals and criminal organizations, stealing their wealth and splitting it among the team. The Shroud also kept careful watch over his team, ensuring that none of the group members preyed on the innocent. Under the Shroud's leadership, the Night Shift even allied with Captain America against the Power Broker. During this time, Shroud only revealed his true plans to Jack Russell, whose violent werewolf persona was kept in check by Dansen Macabre's powers.[2]

Dansen Macabre eventually became the Night Shift's deputy leader, overseeing the group's criminal activities whenever the Shroud was absent. During one of these periods, Dansen Macabre led an attack on the West Coast Avengers as revenge for the capture of their teammate, Digger.[3][4]

The Shroud and Werewolf departed the Night Shift, leading to them being taken over by the villainous Hangman. The Hangman was a supernatural servant of the demon Satannish and tricked the Night Shift members into exchanging their souls for increased powers and a promise of Hollywood stardom. While serving Satannish and the Hangman, the group again came into conflict with the West Coast Avengers. However, once the Night Shift members learned that their souls were threatened, they joined forces with Doctor Strange and the West Coast Avengers to defeat Satannish and his servant. In the aftermath of this battle, the Night Shift lost their enhanced powers and were taken into custody by the Avengers.[5] As a result, Hangman severed his ties with the group, and joined Satannish's Lethal Legion.[6] At some point, Gypsy Moth and the Brothers Grimm also left the team to resume their own individual careers.

A new version of the Night Shift formed some time later with original members Brothers Grimm, Dansen Macabre, Digger, and Gypsy Moth, with new member Waxman rounding out its roster.[8]

Retrieved from "https://marvel.fandom.com/wiki/Night_Shift_(Earth-616)?oldid=5549266"
Community content is available under CC-BY-SA unless otherwise noted.