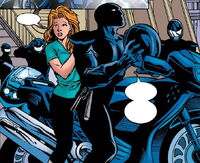 The Nighthawks are a underground resistance group founded by Neal Richmond, the current successor of Nighthawk, to wage war on the Global Directorate, the totalitarian government that taken control over Earth following the disappearance of the Squadron Supreme. The Nighthawks were taught to Nighthawk's creed of using nonlethal force but only the exception when it is considered when all other options have failed. However, the militant-minded Nighthawks often strayed from their leader's lessons much to Nighthawk's consternation. The Nighthawks have a very distrustful view on the Squadron Supreme as they blamed the superhero team for all the problems that befell on their world since their ill-fated Utopia Program that inadvertently led to the creation of the Global Directorate and holding them responsible for the death of the original Nighthawk.

The Whizzer of the Squadron Supreme encountered the Nighthawks when they had saved his family from the Blue Eagles, the secret police of the Global Directorate. The Nighthawks kept Whizzer's family under their protection rather than under the Whizzer, given their obvious hostility toward the Squadron, until Nighthawk released them.

Retrieved from "https://marvel.fandom.com/wiki/Nighthawks_(Earth-712)?oldid=5549269"
Community content is available under CC-BY-SA unless otherwise noted.