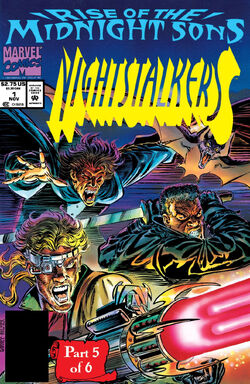 Base of Operations
Boston, Massachusetts
Affiliations

Origin
Formed by Dr. Strange as an elaborate plan to take out the Vampires for good.

The shadows and the darkness, they've protected the occult for too long...

The team of Vampire hunters was created by three loner hunters. They decided to pull their resources and finally hunt down and kill Dracula. The team consisted of Blade, the human/vampire hybrid who was known to the creatures of the night as the Daywalker, Hannibal King, a Vampire detective who vowed never to take a human life and Frank Drake, a distant ancestor of Dracula himself. The team hunts Dracula with the help of Quincy Harker and Rachel van Helsing.

The group became a detective agency with the official name of Borderline Investigations, but to the Vampires they were the Nightstalkers.

It was revealed that the team was actually formed by Dr. Strange as an elaborate to take out the Vampires for good. Dr. Strange had tried to wipe them all out with the Montesi Formula. This was a spell contained in the Darkhold capable of destroying all vampires utterly. The downside to using the spell is that the effect is temporary. Once the spell is broken, the Vampires it destroyed are returned to life. The spell had started to weaken and worried that Dracula the Lord of the Vampires himself would return. Dr. Strange allowed the team to battle lesser threats to gain experience before the main battle when Dracula does come back to life.[1]

The mother of all demons, Lilith, hired Blade's agency to kill Ghost Rider -- the leather-clad, motorcycle-riding Spirit of Vengeance -- and bad-boy Johnny Blaze, the fiery skeleton's former host. After a protracted battle, Blade and company realized they had been duped. The team joined with Ghost Rider and Blaze against Lilith, battling her monstrous minion Meatmarket. [2] Blade, Drake and King continued their partnership with Ghost Rider and Blaze. Along with Dr. Strange, Morbius the Living Vampire and the Darkhold Redeemers, they formed the Midnight Sons, a group dedicated to preserving the boundaries between our world and the dark realms. The Midnight Sons clashed with Lilith and her demons spawn, the Lilin, in a supernatural contest with Earth as the prize. The Midnight Sons proved victorious, destroying Lilith and her brood. [3] Blade also rescued his close friend Safron Caulder from the Darkholders. [4]

The Nightstalkers also battled other threats, such as Hydra's D.O.A. (Department of Occult Armaments).[5][6][7]

The Nightstalkers became a part time members of the Midnight Sons.[8] [9]

The team work with the Punisher (Frank Castle) to battle Shiv a dangerous cult leader.[10] Working together they are able to stop the cult from sacrificing any more people[11] The team battle various supernatural threats such as Stonecold[12] and Vic Slaughter[13] along with the return of the D.O.A[14][15] They also encountered the dreaded Short Circuit[16] teamed up with an evil alternate reality version of Hannibal King.[17]

Blade's desire to destroy supernatural enemies led him to be tricked into using the Darkhold.[18]As 'Switchblade' Blade attacked a number of supernatural beings and stole their power in the 'Midnight Massacre'.[19] King and the Nightstalkers eventually stop Blade and another page of the Darkhold was used to restore things back to normal. [20]

The worked with the Darkhold Redeemers to battle Martine Bancroft[21] and the Lilin.[22] Who even Doctor Strange could not help. [23]

They later battle Bloodstorm a clone of Dracula and the first of a line of vampiric shock-troopers utilized by Hydra's D.O.A..[31] He was created in a lab by Lt. Belial, but as soon as he emerged, he began slaughtering all the Hydra personnel present, including Lt. Belial at the hypnotic command of Varnae.[32]

Upon the eventual weakening of the Montesi Formula, and the return of vampires, Blade encountered and staked a former ally, a now-vampiric Taj Nital. However, the team was unable to prevent its hated quarry, the vampire, from returning to the Earth realm. Blade, Drake and King, who again had become afflicted with vampirism, began their crusade anew to cleanse the world of all bloodsuckers. Blade and his partners clashed with dread lord Varnae-- supposedly the first vampire, the demon who had visited this hellish curse upon men. King and Drake were slain in a bloody and futile battle. The loss of his compatriots only strengthened Blade's resolve to rid the world of vampires, regardless of the circumstances of their creation. Following their victory, King was cured of his vampirism.[33]

Retrieved from "https://marvel.fandom.com/wiki/Nightstalkers_(Earth-616)?oldid=5549273"
Community content is available under CC-BY-SA unless otherwise noted.