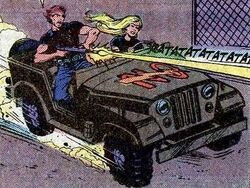 The Nihilist Order was a team formed by the Red Skull to discredit Captain America. When the Order committed a crimes, hired actor Edward Ferbel aka Nomad would come in and pretend to stop the crime. Skull also paid reporter Will Brynner to report positively on Nomad and negatively on Captain America. Skull eventually had Ameridroid kill Nomad when he was no longer useful to his plan. After killing Nomad, Ameridroid captured Cap and brought him to Skull. After Cap reminded Ameridroid of how he was placed in a robotic body, he turned on Skull but was knocked out.[1]

Skull escaped after seemingly destroying Ameridroid after a second confrontation. After being found by Cap, Skull revealed that he created a documentary about Captain America that would actually cause its viewers to be hypnotized into going into a violent riot. Then Ameridroid appeared one last time and fell on top of Red Skull, resulting in an explosion. Cap immediately burned Skull's documentary so it couldn't be used. The remaining members of the Nihilist Order surrendered to the authorities. Brynner was also arrested when the Order members revealed his part in Skull's plan.[2]

Like this? Let us know!
Retrieved from "https://marvel.fandom.com/wiki/Nihilist_Order_(Earth-616)?oldid=5549275"
Community content is available under CC-BY-SA unless otherwise noted.