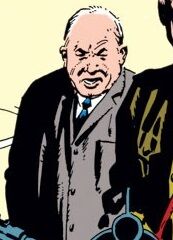 When Doctor Doom caused chaos in the electrical and electronic devices in the US, many Russians were glad, but Comrade K was worried - as Doom was not their ally, he feared Doom may attack the Russian technology next.[1]

Soon afterward, the Sub-Mariner, having recovered control over the undersea kingdom of Atlantis, proclaimed the oceans as his Empire, forbidding any human to travel through or over it, and sent this message to the United Nations. Khrushchev, as delegate and representative of his country, disregarded this threat as a mere lie from capitalist powers while pounding his table with a shoe. The final decision was to confront the Sub-Mariner, leading to a short-lived war against him.[2]

He sent agents of the Soviet Union to the US on several occasions, where they clashed with American superheroes. His first known action was sending KGB agents to the US to steal a formula against radiation poisoning, which was prevented by Ant-Man.[3] He also sent Anton Vanko to defeat Iron Man,[4] and later sent The Black Widow and Boris Turgenov to assassinate Vanko.[5]

Retrieved from "https://marvel.fandom.com/wiki/Nikita_Khrushchev_(Earth-616)?oldid=6411942"
Community content is available under CC-BY-SA unless otherwise noted.